The mascots of Rugby World Cup 2023 will be known as Land Rover Defenders of Tomorrow.The rugby mascot programme allows young rugby fans to join team captains on the pitch ahead of every match.
By : HT Auto Desk
| Updated on: 17 Nov 2021, 15:34 PM

Land Rover has become the fifth worldwide partner for Rugby World Cup 2023 that will be held France. The automaker's rugby ambassadors Dimitri Yachvili and Bryan Habana, together with the company's first child mascot for the tournament - eight-year-old Arthur were present at the occasion of announcement.

The companies also announced a youth Rugby World Cup mascot programme in order to give youngsters a platform to demonstrate their support towards building a better future. The mascots will be selected for their passion and commitment to changing the world for the better. The mascots of Rugby World Cup 2023 will be known as Land Rover ‘Defenders of Tomorrow’, reflecting both the partners’ joint commitment towards a more sustainable future.

Since its association with Rugby World Cup in 2015, Land Rover says that it has inspired thousands of children from across the world through its grassroots activities such as the mascot programme. The platform also allows young rugby fans to join team captains on the pitch ahead of every match. 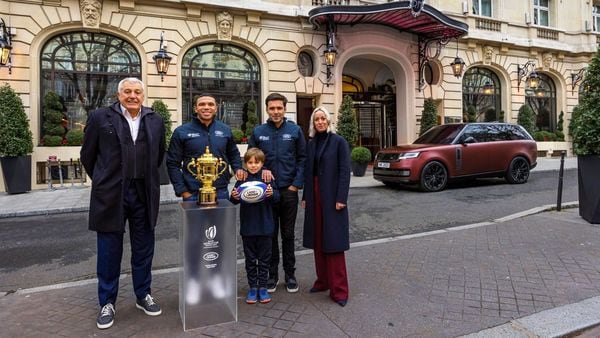 Land Rover's rugby ambassadors Dimitri Yachvili and Bryan Habana, together with the company's first child mascot for the tournament - Arthur - were present at the occasion of announcement.

Arthur, who plays rugby for Racing club Asnières (sur Seine) near Paris, was also selected in the same way. I am really excited to be the first Land Rover Defender of Tomorrow. I can’t wait… to tell all of my friends at my rugby club that I am going to be on the pitch," he said.

In Land Rover's earlier association with Rugby World Cup in Japan, the automaker's Impact Beyond programme introduced 10,000 children to the sport. "We are excited to share the same vision and commitment for France 2023 and look forward to working together to drive change for the future," said World Rugby Chairman Sir Bill Beaumont.

As Land Rover works its way towards a future of electric vehicles, its commitment is in line with the rugby tournament's vision to minimise carbon emissions. “Land Rover has set out an ambitious roadmap for electrification and positive societal impact which is totally in line with the ambition of our event," said France 2023 CEO Claude Atcher.