Kia unveils EV6 in US with new logo, changes name to Kia America

Earlier, Kia Motors had changed its name for the Korean and the Indian market as part of its global brand strategy.The EV6 unveiled for US is the same showcased by the carmaker last month.
By : HT Auto Desk
| Updated on: 28 May 2021, 14:42 PM 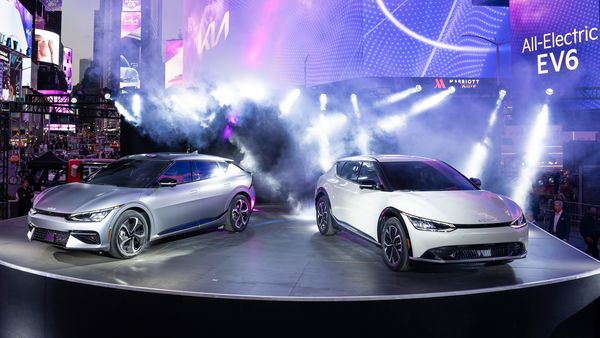 US debut of the new Kia logo, global brand strategy and all-electric 2022 EV6 during a Times Square billboard takeover event on May 18.

Kia Motors America is now past. From Tuesday, the Korean carmaker rechristened itself as Kia America, just like it has done in some other markets recently. The carmaker also showcased its new logo in the United States and offered a brand new electric car - the EV6 - for its US customers.

Kia EV6 electric SUV was unveiled by the carmaker last month. It is the first fully electric vehicle from the Korean carmaker globally to be based on its Electric-Global Modular Platform (E-GMP). The bookings for the EV6 will begin next month in US. The EV6 is expected to hit the roads sometime early next year.

Kia's name-change in US does not come as a surprise. It is something the carmaker has already done in the South Asian markets as well as India recently. It is part of the Korean auto giant's global brand strategy that aims to focus on electric mobility to reduce carbon footprint.

Sean Yoon, president and CEO at Kia America, said, "This is an important and inspiring time in Kia’s history. On a global scale, our brand is sharpening its identity, and defining a sustainable, purposeful strategy within existing, new and to-be -developed vehicle segments as well as larger efforts we are now ready to pursue. Today’s announcement signals that Kia in the US is fully aligned with Kia Corporation’s global strategy and primed for continued success."

The change is reflected on the EV6 electric SUV as well, which now wears the new brand logo at the front, on steering wheels and other parts of the car. According to the carmaker, "The rising movement of the two diagonal strokes are accentuated by beveled ends and reveals an unexpected subtext, ‘Ki,’ or ‘to rise'. Narrow connections between the characters emphasise the power and energy of movement, and the wide proportions of the three vertical pillars reinforce stability and provide a confident and balanced appearance."

Apart from the new logo, the EV6 unveiled for the US market is not much different from the version showcased by the carmaker last month. The EV6 will be offered in four variants in US. The top variant has a claimed range of more than 480 kms on single charge. The four-wheel drive variant is the most powerful with dual motors churning out 576 horsepower.

Kia said that the EV6 'marks a new and transformative era in Kia electrification'. The EV6 is the first vehicle developed on the E-GMP platform dedicated exclusively to electric cars. The electric SUV supports 400v and 800v charging. Kia claims that, when hooked to a fast charger, the EV6 can replenish 112 kms of range within five minutes and more than 330 kms in about 18 minutes.