Kia Motors has also launched an AI-based owner’s manual app developed in partnership with Google Cloud and Megazone.
By : HT Auto Desk
| Updated on: 19 Jun 2020, 11:00 AM 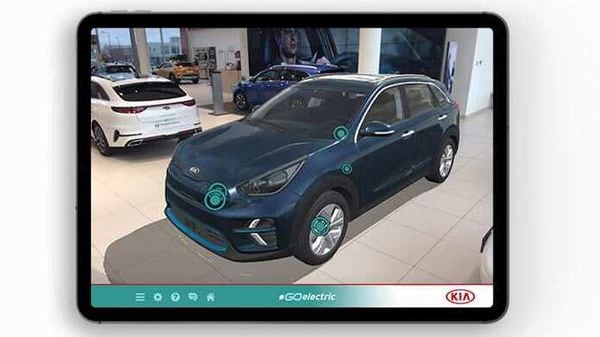 Kia Motors Europe has launched a new app called Go Electric as a helpline for customers to know more about their electric vehicles.

Kia Motors Europe has launched a new app, ‘Go Electric’, to explain all the aspects of the carmaker’s electric vehicles to its customers considering plug-in options. The new app seeks to answer questions that many drivers have about new EVs, including how the various powertrains work, how the driving experience differs and how to charge.

The first version of the Go Electric app is focused on the popular e-Niro fully-electric crossover. It enables users to delve into the car’s many features and technologies, and learn all about the battery performance of Kia’s top-selling EV. The app also lets users customise their ideal e-Niro and create an augmented reality (AR) visualisation of the car - in their favourite colour - using their smartphone or tablet camera.

The AR visualiser lets users see the car in real-world surroundings, with mixed reality (MR) prompts appearing on the car to provide users with additional information on specific vehicle attributes.

The Go Electric app will be used by Kia dealer staff to help explain the brand’s growing range of EVs to customers. Following the outbreak of the coronavirus pandemic, the app also enables customers to learn and discover more about how EVs work from the comfort of their own home.

The app is compatible with many iOS and Android mobile devices. Kia will also update the app in future with new EVs, hybrids and plug-in hybrids from the brand’s European vehicle line-up. The app is currently available in English, with more languages and new content due to be added in the near future.

Kia Motors has also announced the launch of a ‘Kia Owner's Manual App’, an AI-based owner’s manual developed in partnership with Google Cloud and Megazone.

Kia has offered augmented reality (AR) mobile apps to customers in certain markets since 2017. However, wide use of the app was limited as it required measuring all layouts and switches for every new model. Kia, Google and Megazone focused on recognising symbols on the switches making the app compatible with any new models as symbols in vehicles are universal. Partnering with Google Cloud and Megazone means the new Kia Owner’s Manual app can be more easily tailored and adapted for dozens of Kia’s global markets.

The Kia Owner's Manual App explains the functions of features found inside Kia models using the smartphone camera. Instead of having to refer to the printed owner’s manual, drivers can use the app to more easily find information about individual features. The easy-to-use app also has the advantage of being able to explain functions simply and conveniently.

(Also watch: Kia has definite plans of bringing its much-acclaimed EVs to India)

For example, if a user scans the ‘cruise control’ symbol on the steering wheel with a smartphone, the AI platform will recognise the image via server communication. The smartphone then instantly displays a video introducing the detailed functions of the cruise control system.