Mohammad Shami is now the proud owner of a Jaguar F-Type while he also recently purchased a Royal Enfield Continental GT 650 earlier this year.
By : HT Auto Desk
| Updated on: 22 Jul 2022, 11:47 AM 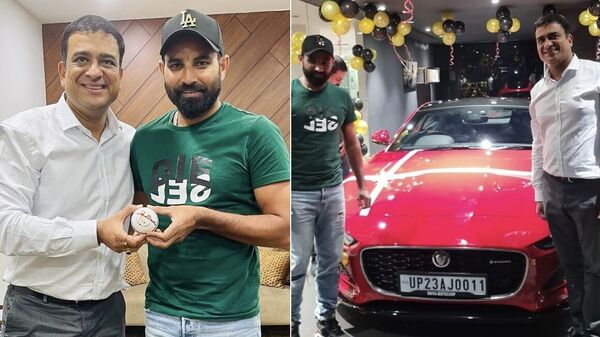 Indian cricketer Mohammad Shami has bought a new Jaguar F-Type. The sports car is finished in the shade of Caldera Red. The Jaguar F-Type costs Rs. 98.13 lakhs (ex-showroom) in the Indian market. Shami's car is the 2.0 Coupe R-Dynamic variant. As the variant name suggests, the F-Type is a coupe with a 2.0-litre turbo petrol engine that puts out 295 bhp of max power and a peak torque output of 400 Nm. It is mated to an 8-speed automatic transmission that is sourced from ZF.

There is also a more powerful version of the F-Type on sale. You can get it as a coupe or a convertible. It is powered by a massive 5.0-litre V8 that has been supercharged. It produces 445 bhp of max power and 580 Nm of peak torque. It also comes mated to an 8-speed ZF transmission. The 5.0-litre engine is known for its iconic raspy exhaust note. The power and torque figures can go up depending on the version that the customer opts for.

In June, Shami bought a new Royal Enfield Continental GT 650. He opted for the Mr. Clean variant which is the top-of-the-line variant. It is priced at Rs. 3.32 lakh ex-showroom. The GT 650 replaced the GT 535 in Royal Enfield's lineup and became the flagship motorcycle that the Chennai-based manufacturer has to offer.

The GT 650 is a cafe racer-type motorcycle which is quite rare in our country. It gets clip-on handlebars, cafe-racer type fuel tank, and rear-set foot pegs and you can get it with a single seat that comes with a racing cowl.

The motorcycle is powered by a 648 cc, fuel-injected, four-stroke, parallel-twin petrol engine that is air-oil cooled. It produces 47 PS and 52 Nm. According to the company, the engine produces 80 per cent of torque from as low as 2,500 rpm. The engine is known for the rumble that it produces because of the 270-degree crank. Moreover, the motorcycle is very smooth, refined and has a torquey power delivery. The gearbox is a 6-speed unit that gets slip and assist functionality.