The 725-metre long Dobra-Chanti suspension bridge will cut down travel time between Pratapgarh and Tehri to 90 minutes from around five hours.
By : HT Auto Desk
| Updated on: 09 Nov 2020, 09:32 AM 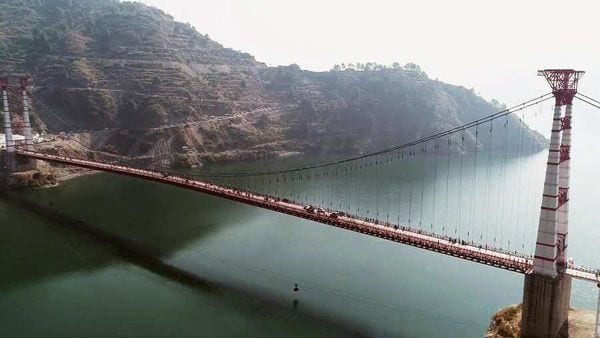 The 725-metre long Dobra-Chanti suspension bridge is spectacular to look at and claims to be quite an experience to be driven on but it is its promise of reducing travel time for both travelers and locals is what makes its inauguration significant.

Work on the bridge began in 2006 and was scheduled for completion by 2008. Due to several roadblocks and challenges - including design flaws and cost escalations, it is only now that it has been opened for public use. It is expected that a travel time of around five hours between Pratapgarh and Tehri will now be brought down to just 90 minutes. This is because locals were previously taking a winding connecting road spanning around 85 kilometers to travel between the two points.

Built at a cost of ₹2.95 crore, the suspension bridge is expected to not just help locals travel quicker but also bring in tourists. "The inauguration of the bridge is a significant and historic moment for the state. It will not only connect the people of Pratap Nagar town with the district headquarters but will also open avenues for development," CM Rawat said. "The bridge over the Tehri lake also reminds us of the sacrifices the people of old Tehri Garhwal made to pave the way for the Tehri dam project."