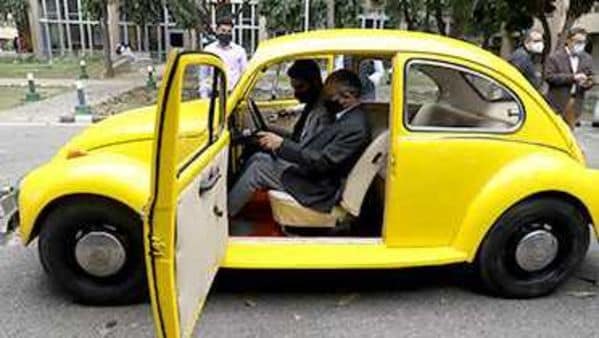 IIT Delhi's Centre of Excellence for Research on Clean Air (CERCA) has retrofitted a vintage 1948 Volkswagen Beetle into an electric model in its maiden initiative on electric mobility.

The curvy yellow Beetle underwent no other changes except replacement of its air-cooled petrol engine with an electric motor. Only a few other components were removed to convert the classic into an electric version. The conversion, in fact, increases the life of the classic which also gets better torque. The original petrol engine can be easily fitted again into the Beetle.

IIT Delhi's initiative aims to convert various other such classics into electric versions. "Many collectors across India owning multiple classics who may actually opt to convert at least one of their cars as a part of this pioneering initiative IIT Delhi," said Diljit Titus, Secretary of the Heritage motoring club of India.

The launch program of Electric Beetle was attended by several members of the Heritage motoring club of India.

The conversion of the Beetle demonstrates how such actions and use of electric vehicles can eliminate air pollution in cities like Delhi/NCR and all over India by use of technology and innovation. "One of the most amicable answers to the problem of Air pollution today is the transition to EVs which are considered 100 per cent emission-free as they do not release any toxic gases," said Arun Duggal, Founder of CERCA.

Shift to electric vehicles has been touted as a crucial step in safeguarding the environment as the last half-century has seen adversarial changes in climatic conditions. In fact, vehicular emissions are one of the major contributors to this issue. "With Indian startups spearheading a revolution in this area especially battery technology, vehicle diagnostics, analytics and charging; the time is not far when India will also join the league of EV capitals," said Prof V Ramgopal Rao, Director, IIT Delhi.