Hyundai Creta is currently the Korean carmaker's best-seller, clocking 12,640 units in March this year.Hyundai Venue subcompact SUV is also one of the top-selling SUVs from the Korean carmaker.
By : HT Auto Desk
| Updated on: 05 Apr 2021, 04:53 PM 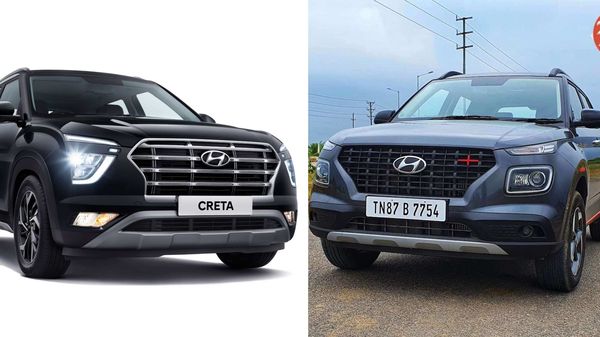 Hyundai Creta (L) and Hyundai Venue (R) are the two best-selling SUVs from the carmaker.

Hyundai Motor India has achieved a major landmark on Monday, as the carmaker clocked 10 lakh cumulative SUV sales so far since 2015. The SUVs, made in India, have been sold in domestic markets as well as exported to markets abroad.

According to the Korean auto giant, the launch of mid-sized SUV Creta in 2015 accelerated Hyundai Motor India's growth in the segment. In a statement released today, Hyundai said that it has hit cumulative sales of over 5.9 lakh units in the domestic market and over 2.2 lakh units in other countries. Hyundai's sub-compact SUV Venue, launched in 2019, has already sold over 1.8 lakh units in India alone so far.

Tarun Garg, Director of Sales, Marketing & Service at Hyundai Motor India, said, "As frontrunners in the introduction of revolutionary technologies, we continue to establish new milestones and redefine benchmarks across segments."

"We have reiterated the promise of Make-in-India over nearly two and a half decades of our presence in India. This achievement also epitomises our manufacturing excellence and the unconditional admiration for Hyundai brand in India," Garg said.

He said that the Hyundai's journey towards establishing itself as the leader in the SUV segment was initiated by models like the Tucson, Santa FE and Terracan. Garg said,"Now we have witnessed exponential growth in the segment with the launch of contemporary brands like Creta and Venue that have quickly gone on to become well established household names."

Currently, the new generation Hyundai Creta is the best-selling mid-size SUV in India. Hyundai sold 12,640 units of Creta SUV in March this year and is placed at number five of top-selling cars in India last month. Hyundai Venue is also the second best-selling sub-compact SUV in India for some time now. In March, Hyundai sold 10,722 units of Venue SUV, and is placed last on the list of top 10 cars sold in India in March, 2021.

The carmaker is now gearing up to launch yet another SUV in India. This week, Hyundai will hold global premier of the Alcazar SUV, which is being seen as the three-row version of its popular Creta SUV. Hyundai hopes to emulate Creta's success in Alcazar too, and cement its place as the leader in the SUV segment in India further.