Cheap access to new cars is turbocharging the growth of Uber and rental car companies in Brazil, as well as lifting automakers' sales. But rental companies gobble up more and more cars at discounted prices.
By : Reuters
| Updated on: 11 Dec 2019, 20:00 PM 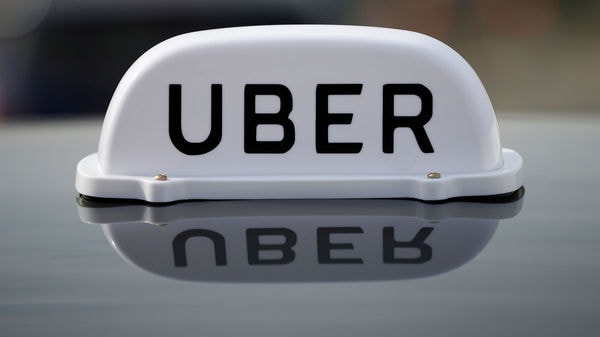 File photo: The Logo of taxi company Uber is seen on the roof of a private taxi.

Like many Uber drivers in Sao Paulo, the ride-hailing app's busiest city in the world, Augusto Caio Pereira does not actually own or lease the car he nudges through the city's notorious traffic jams every day.

Instead, he rents Brazil's best-selling car, the Chevrolet Onix hatchback, for 390 reais ($93) a week from Localiza Rent a Car, the country's largest rental company.

"I like to say that every Monday and Tuesday, I drive to pay the cost of the car" including gas, the 23-year-old Pereira said. "And Wednesday, Thursday and Friday are for me."

Pereira lost his job at a law firm a few months ago, joining Brazil's 12 million unemployed. But now, with no money down, he drives full-time.

Like him, two thirds of Uber's 600,000 drivers in Brazil do not own their vehicles, an executive told rental car executives in October. That figure, previously unreported, is one of the highest proportions worldwide for Uber.

Cheap access to new cars is turbocharging the growth of Uber and rental car companies in Brazil, as well as lifting automakers' sales - up 7% this year.

Yet the sales growth also obscures a deeper crisis for carmakers such as General Motors: their margins are imploding as rental companies gobble up more and more cars at discounted prices.

Bulk orders, known as fleet sales, are at a record high and now account for 46% of all deals in Brazil, up from 25% in 2012, according to dealership association Fenabrave. But retail sales, commanding higher prices, have collapsed by nearly half in the same period, suggesting something of a race to the bottom.

"What automakers see is that their clients, such as rental companies, are making a lot of money with their products, while they are not making any," said Ricardo Bacellar, automotive head at KPMG's consulting arm in Brazil.

"This fleet sales model is unsustainable in the long term."

Car bosses from Detroit to Wolfsburg are keenly aware of the corrosive impact of fleet sales. Since 2015, automakers with factories in Brazil, including GM, Volkwsagen Ag and Ford Motor Co, have received over $50 billion in subsidies from headquarters, according to data from Brazil's central bank.

"The only reason we were able to keep operating in the last few years is because our headquarters offered us loans or injected capital," Luiz Carlos Moraes, president of Brazil's auto industry association Anfavea, said this year.

Meanwhile, the top three rental companies had record profits in all but one year since 2015, financial statements show.

Latin America's largest domestic auto market offers a glimpse of a worst-case scenario for global automakers in coming years as ride-hailing apps and their partners eat away both carmakers' profits and consumer appetite to buy vehicles.

One recent survey presented by Anfavea showed that transportation alternatives like Uber were the second reason, after weak personal finances, dissuading Brazilians from buying cars.

Uber is eager to exploit the tension between rent-a-cars and automakers to push prices down as it grows its driver ranks in Brazil - its second largest market - which is largely made up of those unable to afford car ownership.

The ride-hailing app is recruiting smaller rental companies with the promise that an influx of drivers will help squeeze higher discounts from automakers.

By contrast, GM, despite leading the market every year since 2015, has lost so much money in Brazil that it has considered shutting down factories.

"We are living a critical moment," he wrote.

"GM in Brazil has posted significant losses between 2016 and 2018, a situation that CANNOT BE REPEATED," read the message, which was seen by Reuters.

GM declined to answer questions about fleet sales' impact, as did Vokswagen and Ford.

The scale of the wholesale discount to rental companies is a closely guarded secret.

However, the average price of all cars Localiza bought this year – including SUVs, commercial vans and bulletproof luxury cars – was about $640 below the dealer price for the cheapest Onix, according to companies' figures.

In effect, Brazilian rental companies, bolstered by Uber's scale, have taken on the role of lessor usually fulfilled by dealerships in other markets. But unlike dealers, often small businesses tied to brands, the rent-a-car market is more concentrated and cost-sensitive, pushing down wholesale prices.

Fleet sales in Brazil crossed the 1 million mark for the first time in 2018, and are already at 1.1 million this year.

Meanwhile, Localiza went from buying 2% of the country's new cars and light trucks in 2012 to 10% this year. Ride-hailing drivers are its fastest-growing segment.

With Brazil only recovering slowly from recession since 2017, automakers have had little choice but to follow demand into wholesale, said Guido Vildozo, of research firm IHS Markit.

"These are desperate vehicle sales," he said.

In 2013, the year before Uber came to Brazil, just 6% of new Chevrolet Onix units were fleet sales. This year it is over 40%.

But selling more has not been a silver bullet.

Explaining why revenue was down in 2019 outside North America, GM told investors recently that a big reason was an "unfavorable mix primarily due to increased sales of the Chevrolet Onix in Brazil."

In October, Caleb Varner, Uber's head of vehicles for Latin America, pitched to dozens of small rental car company executives at a niche conference attended by Reuters. He assured them Uber would help bring new demand to rent-a-cars.

"With that demand you guys can grow in scale ... buy more cars, and obtain higher discounts from automakers," Varner said, calling it a "virtuous circle" for Uber and rental companies.

Despite initial fears at Uber's arrival in 2014, rental companies including the biggest three - Localiza, Unidas and Movida - now have close relations.

Uber has gone to significant lengths to appeal to rental car companies, ensuring they get automatically paid before a driver pockets earnings, which also keeps them on the road longer.

With many car factories still underutilized because of weak recovery, automakers do not yet see a way out of the cycle other than sucking up losses until the economy prospers again or the unwanted solution of quitting Brazil.

Ford shut its oldest Brazilian factory this year, after losing billions of dollars in the region.

Some automakers, which have been offering rental cars directly in developed markets for years, are now experimenting with the same strategy in Brazil.

Toyota, which has fewer fleet sales than GM, is "investing heavily" in a rental business in Brazil, it said. Brazil's CAOA - which makes cars for Chery and Hyundai - announced on Tuesday that it would set up its own rental business.

With fleet sales in Brazil set to keep rising, according to a recent KPMG poll of auto executives, their conundrum looks likely to deepen. "The model is here to stay," Localiza CEO Eugenio Mattar told Reuters.