How Elon Musk’s tweet ‘thrilled’ an island desperate for Teslas 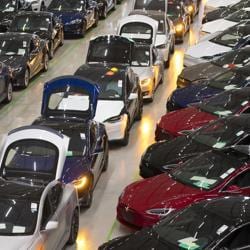 First, he persuaded Elon Musk to expand into Iceland. Now, he's predicting an exponential rise in sales of electric cars in a country that gets its energy from volcanoes.

"The supply of electric cars is not satisfying demand at the moment," Johann Olafsson, who heads Iceland's Electric Vehicle Association, said in an interview in Reykjavik. If it did catch up with demand, sales would probably "more than double each year for the next few years," he said.

Olafsson says he was "thrilled" to receive Musk's positive response to his request via Twitter for a Tesla service center to open in Iceland. "I hope it will happen before the release of the Model 3."

Earlier this month, Musk tweeted to Olafsson: "Thanks for letting me know. Will expedite. Sorry for the delay."

Musk found time to answer the Tweet from Iceland after getting embroiled in a spat with Wall Street. The 46-year-old was grilled by analysts probing the company's finances last week after Tesla suffered production setbacks with the Model 3, its first mass-manufactured car. 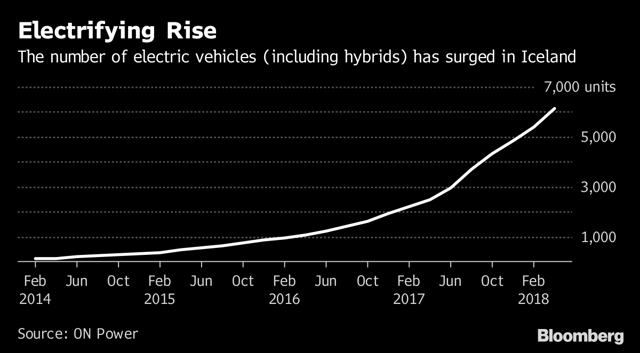 Icelandic buyers interested in electric vehicles (EVs) currently face waiting times of up to nine months, Olafsson said. According to data provided by ON Power Company, Iceland's biggest electricity utility, the island had less than 100 electrically-powered vehicles (including hybrids) at the start of 2014. That figure had risen to 6,145 by April of this year.

Electric vehicles cost even less to run in Iceland than elsewhere. Thanks to its location on a system of volcanoes, Iceland has enough geothermal power to provide free electricity to its roughly 350,000 inhabitants. (Icelanders even enjoy heated sidewalks in some cities.)

Electric vehicles are for the most exempt from VAT in Iceland (an exemption that will end when more than 10,000 EVs are sold) and are totally free of import duty. The government, headed by environmentalist Prime Minister Katrin Jakobsdottir of the Left-Green Movement, says improving the network of charging stations plays a key role in supporting the transition away from dirty fossil fuels.

The removal of similar incentives has caused sales of EVs to collapse in Denmark, though the prime minister there, Lars Lokke Rasmussen, recently said he's open to reconsidering subsidies.