The contract workers have been protesting outside the Honda plant at IMT-Manesar since November 5 after around 650 such workers were retrenched by the company over a period of 10 days, the workers’ union said.
By : Hindustan Times, Gurugram
| Updated on: 12 Nov 2019, 07:32 AM 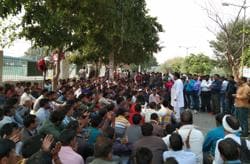 Striking Honda contract workers of Honda are demanding that the retrenched workers either be recalled or be paid a compensation of Rs 1 lakh per worker for each year of service.

Impasse continued at the Honda Motorcycle and Scooter India (HMSI) plant in Manesar, where 1,500 contract workers went on strike a week ago to protest the retrenchment of their colleagues, as no resolution could be reached even on Monday. This comes a day after the management issued a notice to employees stating: "Due to the prevailing IR (industrial relations) situation, plant operations have been suspended and the plant will remain closed till further intimation".

The contract workers have been protesting outside the plant at IMT-Manesar since November 5 after around 650 such workers were retrenched by the company over a period of 10 days, the workers' union said. Workers have demanded that either they be recalled or be paid a compensation of ₹1 lakh per worker for each year of service.

Production has been affected ever since as the company shut a few of its production units.

Another round of talks was held on Monday between the management and the union, however, no solution could be reached, said the union president Suresh Kumar Gaur. "A representative from the management didn't make it to the meeting. We expect that a solution can be reached on Tuesday," he said, adding that the strike will continue indefinitely.

An HMSI spokesperson, on the condition of anonymity, confirmed that all the three assembly lines - two for motorcycles and one for scooters- of the plant would remain shut until further notice or till the matter settles. The management did not categorically respond to the allegations levelled by the workers' union.

Honda's Manesar plant employed around 1,900 permanent workers and 2,500 contractual workers until recently, according to the workers' union. According to Gaur, many of those asked to leave in the last 10-odd days were employed with the company for many years and that their termination was illegal.

Meanwhile, union members of other automotive factories in the area and representatives of labour organisations have extended their support to Honda's striking workers. "We are working towards a solution and hope the management listens to the demands of these workers who have been employed with the company for a long time. Hopefully, a decision should come out on Tuesday," said Anil Pawar, representative of the All India Trade Union Council.

In a press statement last week, Honda had said the workers, whose term had completed, were relieved due to demand fluctuations and production adjustment. In August, Honda had laid off about 700 contract workers because of a production cut, as per figures released by the company. Company officials said then the industry was facing a demand slump and the job losses were a consequence of the downturn.

HMSI sales had fallen marginally to 517,808 units in October, down from 521,170 units a year earlier. Demand for two-wheelers and cars has declined as consumers spend less because of a downturn in economic growth, which eased to an over six-year low of 5% in the quarter ended June.