Polaris and Harley’s actions are the latest indication corporate America is taking a harder line against systemic racism in the business world.
By : Bloomberg
| Updated on: 24 Jun 2020, 12:29 PM 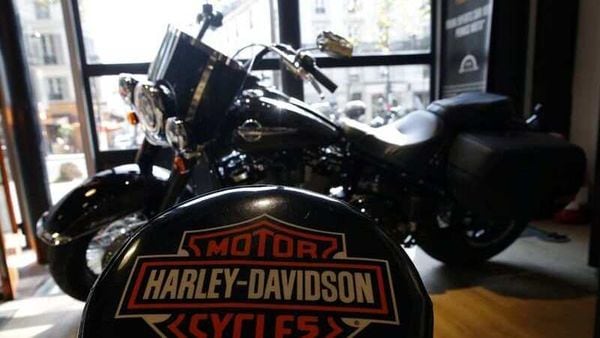 The logo of Harley-Davidson is seen on one of their models at a shop.

Harley-Davidson and Polaris are ousting a dealer from their retailer networks after racist comments disparaging Black Lives Matter protesters were posted to his personal Facebook page.

Activists in Tennessee took screen shots and shared a post made earlier this month on the Facebook page of Russell Abernathy, who owns Polaris, Harley-Davidson and Honda Motor powersports stores in Union City, near the northwest corner of the state.

“I’m sick of this black lives matter," read the post, which then used an expletive to call for Black people to return to Africa. Abernathy has said his Facebook page -- which features a photo of him standing next to a motorcycle and pointing up at a Confederate flag -- was hacked, according to Honda.

Abernathy didn’t respond to multiple messages left at his stores seeking comment. In a statement on his Harley dealership’s website, he said he didn’t write the post and rejects its content. Honda condemned the remarks and said it is investigating.

Harley said Tuesday it has decided to cut ties with Abernathy, almost a week after Polaris announced it would part ways with him.

Polaris and Harley’s actions are the latest indication corporate America is taking a harder line against systemic racism in the business world. Polaris is headquartered in a suburb of Minneapolis near where George Floyd, an unarmed Black man, died late last month after a city police officer knelt on his neck for almost nine minutes. The maker of all-terrain vehicles said June 3 it would donate $250,000 to local charities supporting racial equality.

While Polaris and its peers are pledging to do more to stamp out racial bias within their ranks, their networks of hundreds of independent retailers across the country add another layer of complexity to those efforts.

Harley, which has spent years trying to market to women and minority riders to expand its US ridership beyond its core base of older white men, has forbidden licensees and dealers from using the Confederate flag with any of its logos, merchandise or products in a shift from the 1970s, when the company sold Confederate Edition bikes.

“Racism, hate or intolerance have no place in the Harley-Davidson community -- employees, dealers, riders or enthusiasts," the Milwaukee-based manufacturer said in a statement. “The dealer owner in question will no longer be part of our dealer network and we are finalising details on the dealer owner’s exit."

Honda said in a tweet that “racism and intolerance have absolutely no place in our company."

Abernathy, who goes by the nickname “Tootie," is a third-generation owner of a Harley store. His grandfather began working on motorcycles out of his garage in 1955, according to his company’s website.

Polaris said in a June 17 statement that Abernathy had agreed to cede ownership of his store.

“Should that transfer not occur, Polaris will terminate our relationship with current ownership," the company said.