GM alleged in its suits that the men were secretly paid to pass confidential information, such as details of GM’s view of a potential merger with its rival and its approach to labor talks, to Fiat Chrysler and the union.
By : Bloomberg
| Updated on: 16 Sep 2020, 09:34 AM 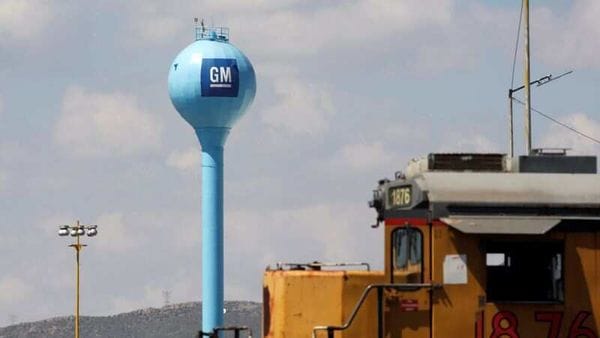 The GM logo is pictured at a General Motors Assembly Plant. (File Photo)

GM sued Ashton Tuesday in federal court in New Jersey and Iacobelli in state court in Michigan. The suits come just weeks after GM alleged in a racketeering suit against Fiat Chrysler that Ashton, who was the UAW appointee to GM’s board, and Iacobelli, who left FCA in 2015 to become head of North American labor relations at GM, were being paid through offshore accounts to spy on GM.

Iacobelli pleaded guilty in January 2018 to tapping a union training fund to splurge on a Ferrari, Montblanc pens and a mortgage and was sentenced to 5 1/2 years in prison. Ashton, who pleaded guilty to wire fraud and money laundering conspiracies in December, is set to be sentenced in November.

GM alleged in its suits Tuesday that the men were secretly paid to pass confidential information -- such as details of GM’s view of a potential merger with its rival and its approach to labor talks -- to Fiat Chrysler and the union. GM is seeking to recover money that it paid to Ashton while he was on the board as well as unspecified damages from both men.

“Iacobelli facilitated a years-long scheme to harm GM through certain illegal payments to high-level UAW officials," GM said in its suit. “He then joined GM under false pretenses and furthered the scheme by acquiring and then passing GM’s confidential information onto GM’s competitor, FCA, and other conspirators."

Jerry Ballarotto, an attorney who represented Ashton in his criminal case, and David DuMouchel, a lawyer for Iacobelli, didn’t immediately respond to requests for comment on the suits.

GM alleged last month that former UAW President Dennis Williams received funds from Fiat Chrysler to place Ashton on GM’s board. Williams was charged by federal prosecutors several weeks later in an information, which is likely an indication that he intends to plead guilty. A plea hearing is scheduled for September 30.

Citing the alleged payments to Williams as new evidence, GM asked U.S. District Judge Paul Borman in Detroit to reconsider his July decision to dismiss its suit against FCA, but its request was denied on Aug. 14. GM has appealed and also filed a new suit against FCA on Monday in Michigan state court.

FCA in a statement called Monday’s suit “nothing more than a rehash of the preposterous conspiracy theories propounded by GM in its Federal lawsuit that Judge Borman dismissed with prejudice." The company said it would aggressively defend “against GM’s baseless attempts to tarnish FCA’s reputation."