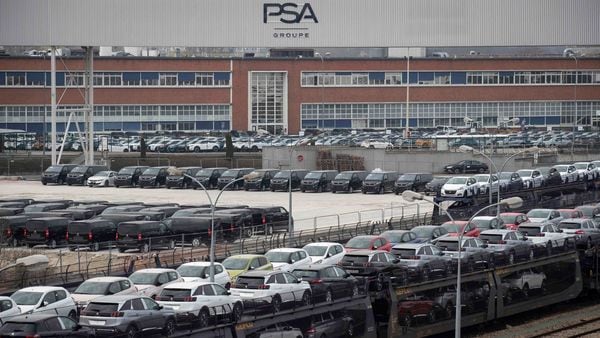 File photo: Cars are parked in a lot in front of a plant of French automaker PSA Peugeot-Citroen, at Poissy, on the outskirts of Paris.

The drop was even steeper than the 72-percent contraction seen the previous month, when all non-essential businesses, including auto dealers, closed March 17 in a bid to slow the spread of Covid-19.

Fewer than 21,000 new registrations were counted in April, of which 17,000 were for cars made by France's two big automobile makers, Renault and PSA, which groups Peugeot, Citroën, DS and Opel, according to the French carmakers' association, CCFA.

PSA and Renault did slightly better than their foreign competitors, with drops of 84.3 percent and 83.8 percent, respectively.

"There were some deliveries, some car registrations, especially by Renault and PSA, for medical staff, government workers and individuals who had ordered and already paid for their cars," Francois Roudier, spokesman for the CCFA, told AFP.

"Looking ahead, it will be the recovery plan that determines the state of the market over the year," Roudier said. "There are a lot of unkowns."

(Also read: French commuters urged to get on their bikes when lockdown ends)

These unkowns include the financial health of dealers, who have been hurt by weeks of closures, albeit with a slight uptick reported during the last week of April.