Ford is looking at playing the EV game by also focusing on the potential that electric vans and trucks may have.Ford is gunning for the dominance currently enjoyed by Tesla in the EV space.
By : Bloomberg
| Updated on: 13 Nov 2020, 08:08 AM

Ford is aiming for commercial-vehicle leadership in EVs.

Ford Motor Co., playing catch-up to Tesla Inc. in electric cars, is rolling out a battery-powered cargo van to lay claim to a new segment of the commercial fleet market that its gas-powered vehicles dominate.

Chief Executive Officer Jim Farley on Thursday unveiled an electric version of its Transit model, the ubiquitous airport shuttle, delivery and service van that is the top seller of its kind in the U.S. and Europe. It will face off against Daimler AG’s Mercedes-Benz EQV battery-powered van sold in Europe and electric vans made by startups such Amazon.com Inc.-backed Rivian Automotive Inc., in which Ford also is an investor.

(Related read - 'Tesla is not a Mustang': Ford hypes Mach-E as a game changer)

Ford is aiming for commercial-vehicle leadership in EVs with the combination of the E-Transit coming late next year and a battery-powered F-150 pickup debuting in 2022. Farley, the former Toyota Motor Corp. executive who became CEO last month, sees a vast profit opportunity in boosting sales of mundane models that haul people, packages and payloads. The company said it expects industrywide electric-van sales to reach 1.1 million units globally by the end of the decade.

“We think there will be a boom in electric over many locations because we see so much inbound demand and interest in buying," Ted Cannis, general manager of Ford’s North American commercial business, said in an interview. “Growth is definitely in the plan."

With regulators worldwide mandating zero-emission vehicles -- especially in polluted urban centers -- Ford sees big potential for electrified versions of its trucks and vans. Ford also views the election of Joe Biden -- who has pledged to expand a nationwide network of charging stations -- as another possible boost for plug-in vehicles.

“We are looking forward to working with President-elect Biden and his transition team," Kumar Galhotra, Ford’s president of the Americas and international markets, said in an interview with Bloomberg Televison. “I expect there will be more emphasis on electrification."

Driverless delivery also is viewed as a logical first use of EV technology. Ford last year formed an alliance with Volkswagen AG to develop commercial, electric and self-driving vehicles, though the E-Transit isn’t part of that deal.

With a driving range of about 126 miles and a price starting around $45,000 -- roughly $10,000 more than a gasoline version -- Ford is pitching fleet buyers on a lower “total cost of ownership" because fuel and maintenance costs are about 40% less than traditional vans, Cannis said. The E-Transit will come in eight variations, including three heights and three lengths, and the automaker will work with modification companies to customize vehicles for each buyer.

Ford also is offering an array of services to monitor and maintain the van, using data coming from built-in modems, which help maximize hours in service, Cannis said. It represents “a big new revenue stream that we didn’t have before." 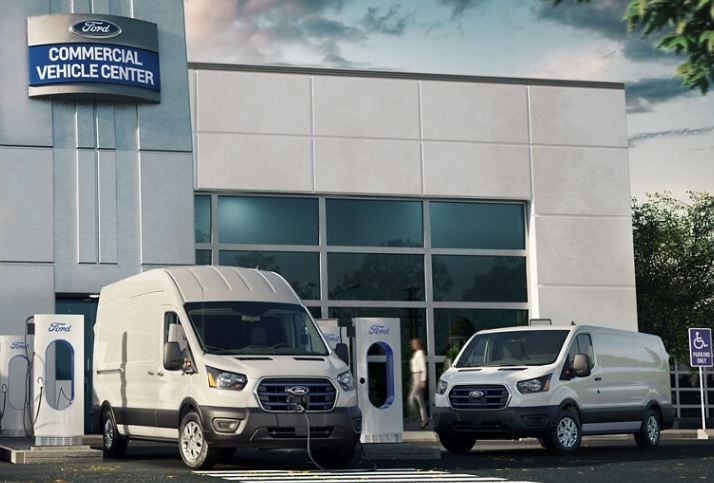 Ford sees big potential for electrified versions of its trucks and vans.

This will help offset the cost of the electric drivetrain, which is more expensive than traditional internal-combustion engines because of the battery and electric motors, Galhotra said.

“That cost of the battery electric is higher," he said. “But we believe by offering a more holistic solution to our customers with these vehicles we can make a very substantial business case, especially in commercial."

Farley is trying to shift Ford’s focus from the single transaction of selling a car to providing continuous transportation services.