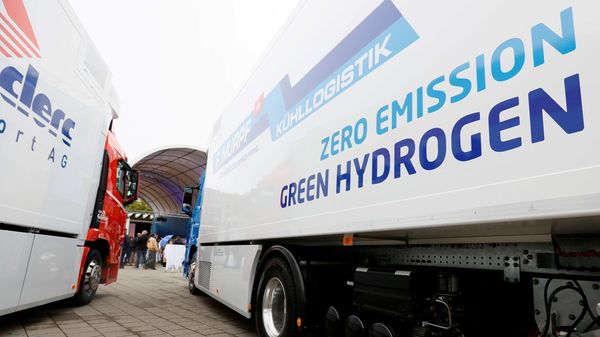 File photo of a new hydrogen fuel cell truck made by Hyundai.

South Korea is one among only a handful of nations that have clearly set sights on hydrogen as the energy source of the future. With plans of injecting massive amounts into development of technology that can harness hydrogen as a fuel source, South Korea wants to take the lead and is mounting a challenge to Europe as the center for the emerging technology.

Bloomberg reports that South Korea has the potential of taking the lead when it comes to harnessing hydrogen power and that it could be at the core of its plans of going carbon neutral.

Here are five factors that are of note in South Korea's dreams and vision for hydrogen power:

Hydrogen is a carbon-free gas that can be burnt or used in fuel cells for power generation or transportation. Cleaner than wind or solar, the technology is expected to eventually play a major role in the global energy mix but is still in its infancy and requires a lot of investment before it’s commercially viable.

South Korea is in a list of nations which primarily has countries in Europe that are working on making hydrogen technology commercially viable.

Five Korean conglomerates will invest 43.4 trillion won ($38 billion) in hydrogen technology by 2030, the Ministry of Trade, Industry and Energy had previously said.

South Korea has stepped up its embrace of hydrogen since it followed China and Japan in setting a carbon neutral goal. The announcement of that 2050 target followed Seoul’s release of a Green New Deal that aims to triple renewable electricity generation by 2025. That will require a fast pivot away from coal and nuclear, which still account for almost half of power generation in the country.

South Korea is aiming to more than double the amount of hydrogen vehicle refueling stations to 180 by year-end, while Hyundai Motor Co. is looking to scale up production of fuel cell vehicles that run on the gas and build more charging stations. SK Group, which own South Korea’s biggest oil refiner, is planning to build what it says will be the world’s biggest grey and blue hydrogen plants by 2023 and 2025, respectively, to power the growing transport fleet.

Hydrogen projects will need to demonstrate to lenders they can generate more certain returns to attract the required $230 billion of funding this decade, according to French bank Natixis SA.

Many experts say that the industry is plagued by lack of cost-competitiveness and that government support, therefore, becomes absolutely crucial.