The rain showers in Delhi NCR caused flooding of the roads in some parts with knee deep water in many key main roads.
By : HT Auto Desk
| Updated on: 13 Jul 2021, 12:15 PM 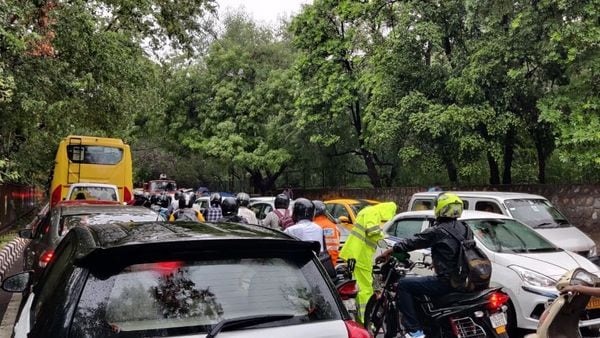 As Delhi received an advanced monsoon shower on Tuesday morning, parts of the national capital witnessed nightmarish traffic jams. In many places, traffic came to a near standstill with commuters stuck for hours. Rain water caused flooding on streets with knee-deep water in many key main roads. Commuters waded through streets filled with water due to ill-equipped drainage systems.

Areas of Ayanagar, Palam, Lodi Road, and the Ridge witnessed rainfall of 1.3 cm, 2.4 cm, 1.9 cm and 1.0 cm respectively. Underpass of Prahladpur area was also severely waterlogged due to the heavy rain showers. The same was the case at the AIIMS flyover and Dhaula Kuan area.

Twitter users shared videos and images of waterlogged streets including areas of AIIMS flyover and Qutub Minar metro station.Commuters could be seen dragging their bikes and wading through knee-deep waters while cars waited on sides, causing traffic jams. The rain showers are expected to cover the remaining parts of the city too, as per the India Meteorological Department (IMD).

The IMD had earlier predicted the occurrence of thunderstorms along with light to moderate intensity rain over south-west Delhi, south Delhi and parts of NCR and adjoining areas including Gurugram, Manesar and Rohtak.