New-car registrations fell 29% during the month to 798,693 vehicles, said the European Automobile Manufacturers’ Association leaving sales for the year only 2.7% higher than at this point in 2020.Volkswagen was hit hardest among major manufacturers with a 42% slide in deliveries during October.
By :
| Updated on: 19 Nov 2021, 11:30 AM 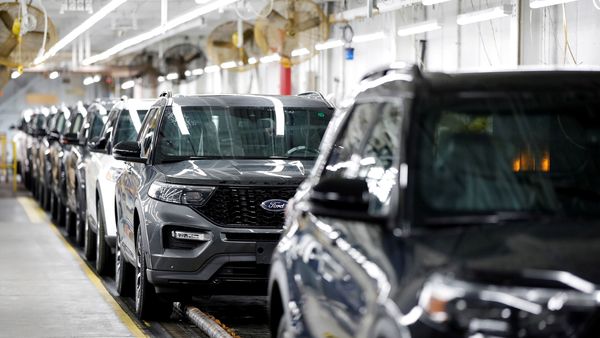 Auto sales in Europe skidded to their worst sales on record for October, as manufacturers hope the protracted shortage of chips slicing production is finally easing.

New-car registrations fell 29% during the month to 798,693 vehicles, the European Automobile Manufacturers’ Association said Thursday, leaving sales for the year only 2.7% higher than at this point in 2020. While deliveries fell for the fourth month in a row, companies are seeing signs the worst of the chip crunch is finally behind them.

“We’re getting by. We’re trying to deal with it," Volkswagen AG Chief Executive Officer Herbert Diess said this week at a conference in Berlin. “I hope we’re through the worst."

Renewed outbreaks of Covid-19 restricting output at chip packaging and testing facilities in southeast Asia during the third quarter unexpectedly exacerbated tight supply of the components, and port closures further snarled shipments. While carmakers have predicted some improvement, the situation is set to remain difficult well into next year.

Volkswagen, Europe’s biggest carmaker, was hit hardest among major manufacturers with a 42% slide in deliveries during October compared to a year ago, according to the ACEA. Sales at Stellantis NV, the second-biggest producer of brands like Fiat and Peugeot, slumped 32%.

“Registrations could improve in November as supply constraints diminish," Bloomberg Intelligence analyst Michael Dean said in a note. “Many manufacturers have partly assembled vehicles so they can be completed swiftly once semiconductor availability improves."

After the long stretch of declines, sales in Europe have fallen for more months than they’ve risen this year, leading market researchers such as LMC Automotive to predict annual sales will likely miss 2020’s pandemic-hit levels.

Automakers have weathered the supply crisis by prioritizing their highest-earning models and raising prices. Among major manufacturers, deliveries at Ford Motor Co. and Renault SA have taken the biggest hit with sales falling 15% and 11% respectively this year so far.