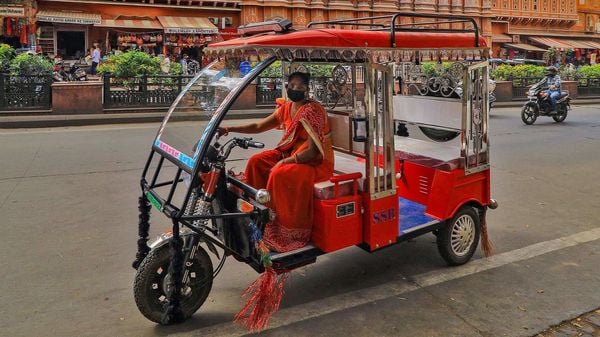 Enigma claims to have sold around 1,200 e-scooters and 300 e-rickshaws last fiscal. (Representational image)

(Also Read: No prior appointment required to get e-rickshaw learning licenses in Delhi)

Besides, the firm is also looking at another deal for a supply of 400-1,000 vehicles to two major e-commerce players, Amazon and Flipkart, in the country, said its co-founder Anmol Bohre.

The firm, which is into the market for over five years now, sold around 1,200 e-scooters and 300 e-rickshaws last fiscal, he added.

Bohre also said that this financial year, the firm also plans to expand its portfolio by three more models, including a high-speed scooter, from two with six variants currently.

Enigma Automobiles has a manufacturing facility in the Mandvi Industrial area of Bhopal, which has a capacity to produce around 4,500 vehicles per annum.

"We already have sold some vehicles to both Amazon and Flipkart. In addition to this, there might be a deal selling another for 200-500 vehicles to them. At the same time, we are also in discussion with a Bengaluru-based company for 2,000 vehicles," said Bohre.

He said the company has, of late, been focussing on the fast-expanding two-wheeler segment, and is setting up a bigger facility to cater to the increased demand for its vehicles.

"We are expanding our product line by three models this fiscal. Two of them will be bikes and one a high-speed scooter, which is expected to come out in the last quarter of the fiscal," he said.

Stating cost-effective products, which offer value for money, as the SP of Enigma in the market, Bohre said.

Enigma is also working on a home-grown lithium-ion battery unit, he added.

"We have been seeing a good growth rate in the past two years, clocking nearly three times growth during the period. We are expecting to cross ₹10 crore revenue this fiscal," he said.