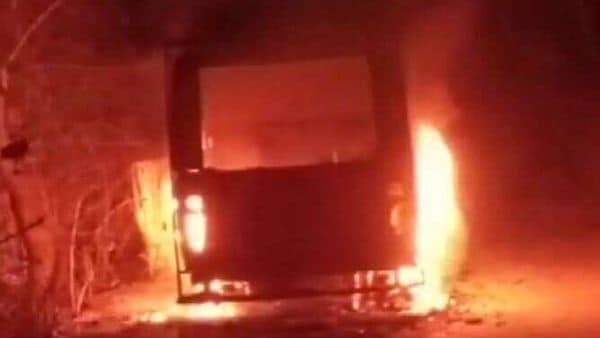 This vehicle was set on fire after it was returning from poll-related work in West Bengal's Purulia. (Photo: ANI)

A vehicle hired for poll duty was set ablaze at Bandwan in Purulia district on Friday night, hours before the first phase of assembly elections get underway, official sources said.

The vehicle was reportedly on its way back after dropping election officials at a polling station, when it was set on fire at Tulsidi village in the once-Maoist-affected 'Jangalmahal' belt of the state, they said.

According to eyewitnesses, the vehicle was stopped by a few persons who emerged out of the forests all of a sudden and allegedly threw a petrol-soaked material on it, before fleeing.

No one was injured in the incident, the sources said.

The vehicle was reduced to ashes by the time fire brigade officials could douse the blaze, they added.

A police investigation is underway.

All the nine seats in Purulia will go for polls on Saturday in the first phase.