EeVe is largely present across Telangana, Jharkhand, Andhra Pradesh, Odisha, West Bengal and north-eastern states.The company is planning to have at least 10-12 products, including low- and high-speed scooters with lithium-ion and acid batteries as well as e-rickshaws.
By : PTI
| Updated on: 17 Apr 2021, 04:49 PM 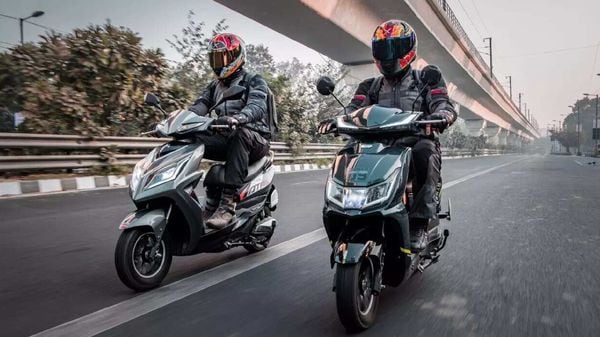 With the addition of new Atreo and Ahava electric scooters, EeVe India has six products in the model lineup.

Odisha-based electric vehicle maker EeVe is looking to tap additional funds worth USD 15 million ( ₹100 crore) and is in preliminary discussions with some of the venture capital funds to fuel its aggressive expansion plans.

The firm, which currently has six scooter models in its product portfolio, all in the low-speed, expects to have at least 10-12 vehicle models, including high-speed e-scooters, e-bike and passenger and cargo three-wheelers going forward, its co-founder and Director Harsh Didwania said.

The company, which rolled out its products in the market in October 2019, is coming up with its own manufacturing plant in Bartana, some 60 km from capital city Bhubaneswar, with an installed capacity to produce 2.5 lakh vehicles per annum.

"We have so far invested on our own around ₹100 crore. As much ₹60-65 crore of these funds have gone into setting up the plant. So, we are already done with the capex (capital expenditure).

"We have started looking for additional funding, which will be required for product development and working capital," Didwania told PTI in an interaction.

He said the promoters had decided to tap external funds only after it is confident about the quality of its offerings and its business model as well as strategy.

"We have already started discussions with few of the venture capitalist funds, which are only at the preliminary stage.

"Nothing is concrete at this stage. Also, till we get capital from the market, we will continue to fund the business with internal resources," Didwania said.

Stating that EeVe aims for a growth which is sustainable in the long term, Didwania said that "in a short span of 18 months despite COVID-19 taking half of the year, we have been able to cross more than 7,000 vehicles across India".

The company is planning to have at least 10-12 products, including low- and high-speed scooters with lithium-ion and acid batteries as well as e-rickshaws, he said.

Plans are afoot to come out with two high scooters between May and June this year, which were to hit the road last November but had to be delayed due to the pandemic.

Besides, an e-bike, the prototype of which is under ARAI process, is also expected to be rolled out by this fiscal year, while the company's first e-rickshaw will also be on the way to market in the next fiscal, he said.

Didwania said his company is the only electric vehicle player in the domestic space, which offers a five-year warranty.

EeVe is largely present across Telangana, Jharkhand, Andhra Pradesh, Odisha, West Bengal and north-eastern states. He said the network is being extended to pan-India with plans to ramp up the dealerships to 150.

"We have appointed dealers in one each in Haridwar, Alwar and Jaipur in North India," he said.

Didwania also said the company is also looking to produce motors, batteries and controllers, which account for almost 85 per cent of the total vehicle cost, in house.

This would give us control over cost of raw material and subsequently help in bringing down the vehicle cost further, he said.