No bottlenecks, no waterlogging. Delhi roads promise to become like those in Europe as the government plans to redesign 500 kilometres of 100-foot-wide roads in the national capital.
By : PTI
| Updated on: 29 Jul 2020, 01:39 PM 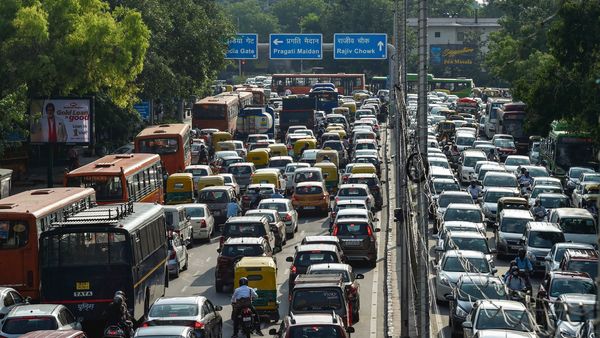 Traffic Jam at the ITO junction in New Delhi on Monday. (File photo)

The Delhi government will redesign 500 kilometres of 100-foot-wide roads in the national capital on the lines of those in European cities, an official statement said on Tuesday.

Chief Minister Arvind Kejriwal held a review meeting of the Public Works Department (PWD) regarding redesigning of seven roads in Delhi on the lines of European cities, it said.

"During the meeting, the chief minister directed that all 100-foot-wide roads of Delhi, total 500 km, will be completely redesigned as per international standards and along the lines of the newly redesigned Chandni Chowk's main road," the statement said.

He has asked the PWD for a detailed plan in three weeks, it said.

"Delhi is the capital of the country. Through this project, it is our dream that Delhi looks like other global capital cities. This will present a better image of India in the world," the chief minister said.

The Delhi government is continuously working to improve Delhi's roads. A large number of people come to Delhi from abroad and if the roads here are beautiful and congestion-free, a different image of India would be presented in front of the world, he said.

"We will also increase the greenery beside these roads which will help us to combat pollution," Kejriwal said.

The roads will be redesigned on Build–Operate–Transfer (BOT) model and the construction company will have the responsibility to maintain the roads for 15 years, the statement said.

The deadline of redesigning the first seven roads was December 2019 but it was extended till August 2021 due to the coronavirus pandemic, it said.

People face issues because there are bottleneck roads, which cause traffic congestions at various locations in the city. Wide roads in many parts of Delhi turn into narrow ones and then back again into wide roads after a few kilometres, creating a bottleneck situation and heavy traffic.

The priority will be to remove the bottlenecks first for a smooth flow of traffic and an organised lane system, the statement said.

The next goal would be to increase the efficiency of the existing space of the roads in the city. There will be measured and planned spaces for vehicles, non-motorised vehicles, footpaths, and side-lanes. The footpaths will be widely mapped to an average of 10 feet for the convenience of pedestrians, it said.

No surface will be left unpaved for dust control. In order to ensure that there is no dust on the roads, grass and shrubs will be planted, the statement said.

The footpaths will be redesigned and reconstructed as per a standard height for the convenience of the physically handicapped. The roads will also have separate spaces for tree plantation and parking of e-vehicles and autos, and a cycle lane.

The slope of the roads, as well as the drains, will be redesigned to tackle the problem of waterlogging. Rainwater harvesting structures will be built inside the drainage systems, it said.

Different types of designs will be displayed on the walls by the road, it added.