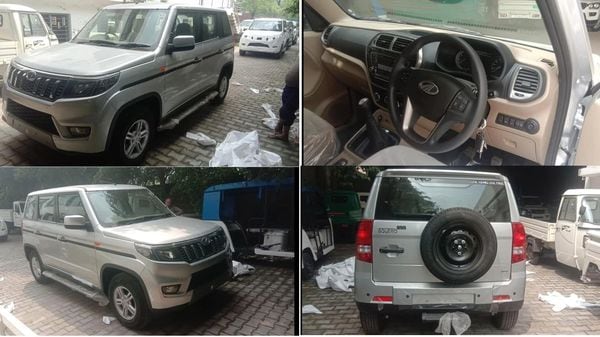 The all-new Mahindra Bolero Neo will be launched on July 15 in India.

Several spy pictures of the all-new Mahindra Bolero Neo have surfaced on social media which is set to be launched on July 15 in the country. In the post, one can see explicitly the exterior as well as the interior of the car. The new images suggest that the cabin of the new model has been updated.

This new Bolero Neo is based on the existing Mahindra TUV300 thus features the same boxy profile but with subtle changes to the front and rear design. The front grille has been entirely revised with mesh design and vertical chrome slats. A horizontal chrome bar connects the square-shaped headlamps with the integrated daytime running lights. The front bumper has been redesigned as well. The Indian automaker has added rectangular fog lamps and a dark shade skid plate to enhance the look of the new SUV.

At the side, a black stripe can be seen running across the side body that matches the plastic cladding around the squared-off wheel arches. It rolls on new five-spoke alloy wheels that lend it a muscular look.

The rear of the new Bolero Neo seems unchanged as it comes with the tailgate-mounted spare wheel, a roof-mounted spoiler and rear parking sensors.

The interior of the car flaunts a two-tone theme of beige and black on the dashboard that comes with an analogue instrument cluster, higher placed aircon vents with silver inserts and a touchscreen infotainment system. The SUV will be a seven-seater car. The second row will come in a bench-type layout and the third row will have side-facing foldable seats.

The Neo will come with a mHawk 100 1.5-litre diesel engine that will be BS 6-compliant. The engine will be able to generate a power of 100bhp and 240Nm of torque. The car is likely to have a manual and an automatic transmission option. The price of the Mahindra Bolero Neo can range between ₹9 lakh to ₹11 lakh. It will pose as a contender to Tata Nexon, Hyundai Venue, and Ford EcoSport.