The driver of a white Hyundai i20 car dragged constable Mahipal Yadav for half a kilometre after refusing to stop for when found to be driving rashly.
By :
| Updated on: 15 Oct 2020, 09:08 PM 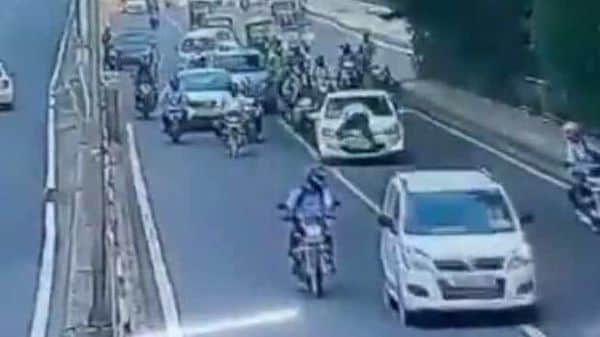 Screenshot from a CCTV footage which captured the incident of a driver continuing to drive despite a traffic official trying to make him stop.

A Delhi Traffic Police constable, who tried to stop a rashly driven car, was dragged on the bonnet of the vehicle for almost half a kilometer in southwest Delhi Cantonment area, officials said on Thursday.

The incident took place on Monday evening near Dhaula Kuan.

The constable tried to stop the vehicle which had a fancy number plate and was being driven rashly, they said.

Constable Mahipal Yadav stopped the vehicle for checking and when the driver tried to flee, he jumped on the bonnet of the car, police said.

The video of the incident has gone viral on social media.

In the video, Yadav is seen on the bonnet of a white Hyundai i20 car, which was being driven in a zigzag way, following which the constable fell on the ground.

#WATCH An on-duty Delhi Traffic Police personnel in Delhi's Dhaula Kuan dragged on the bonnet of a car for few metres after he attempted to stop the vehicle for a traffic rule violation. The car driver was held later.(12.10.20) #Delhi pic.twitter.com/R055WpBm8M

The driver tried to flee from the spot, but was later apprehended by people and other policemen. Yadav suffered some injuries, police said.

The accused has been identified as Shubham, a resident of Uttam Nagar.

A case has been registered under relevant sections of the Indian Penal Code against Shubham, a senior police officer said.