Registration of cars and two-wheelers picked up after the restrictions due to the coronavirus-triggered lockdown were relaxed.Most of the vehicles being bought by the people are in the range of ₹1 lakh to ₹8 lakh.
By : PTI
| Updated on: 13 Jul 2020, 08:10 AM 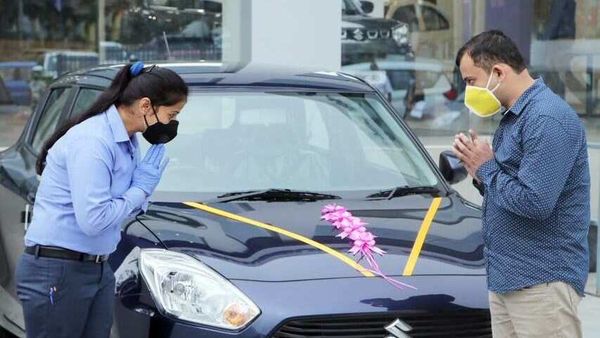 Car makers say they are taking every possible step to ensure safety of customers and employees at showrooms. (File photo used for representational purpose)

In a sign of revival of economic activities in Delhi, over 23,000 vehicles were registered in the city in June, up from just 8,455 a month ago, Transport department officials said here on Sunday.

Registration of cars and two-wheelers picked up after the restrictions due to the coronavirus-triggered lockdown were relaxed, they said.

"The registration of vehicles picked up after 'Unlock 1' was declared, and total registrations were 23,940 in the month," said a senior Delhi Transport department officer.

Official data shows the registrations in June included 18,741 two-wheelers(motorcycles and scooters) and 4,755 four-wheelers, he said.

Seventy-four three-wheelers (both goods and passenger vehicles) and 280 e-rickshaws were also registered in the month, it stated.

In comparison, 6,711 two-wheelers, 1,650 cars, 72 e-rickshaws and seven three-wheelers were registered in May, the figures showed.

The situation is still far from what it used to be before COVID-19. Back then, nearly 40,000-45,000 vehicles were registered in Delhi every month, the officials said.

J S Nayol, president of the All India Car Dealers Association, said the COVID-19 pandemic ravaged the business and the situation will take time to return to normal.

"People are facing financial hardships, so they are going for used cars instead of new ones. We have demanded the government to give relief from GST so that sale of new cars also picks up," he said.

Most of the vehicles being bought by the people are in the range of ₹1 lakh to ₹8 lakh. There is not much demand in high-end cars upwards of ₹10 lakh. The highest demand is in the small car segment, he added.