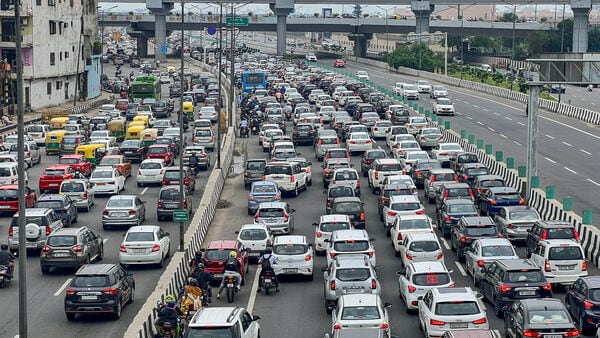 Heavy traffic near the Akshardham Temple in New Delhi on Thursday, July 21, 2022.

Traffic snarls and route diversions are expected in Delhi NCR on Thursday due to several reasons such as protests by the Congress party, the ongoing Kanwar Yatra and waterlogging at various places due to heavy rainfall a day ago. Route diversions are expected to affect commuters travelling to and from Noida and Ghaziabad the most. In order to help commuters avoid being stuck in traffic jams, the city's traffic police department has issued advisory on its Twitter handle.

The officials advised commuters to avoid Motilal Nehru Marg, Akbar Road, Janpath and Man Singh Road between 9 am and 2 pm and informed that special arrangements have been made on these roads, thus traffic movement will not be possible on these roads. Inward movement of buses will also be restricted in New Delhi beyond the Gol Dak Khana junction, Patel Chowk, Windsor Place, Teen Murti Chowk and Prithviraj Road.

The special arrangements come as the Congress has announced that it will stage protests across the country on Thursday against Sonia Gandhi's questioning by the ED. Such protests were also held by the party last month when former Congress president Rahul Gandhi was also summoned  by thee federal probe agency in connection with the same case. Traffic snarls are also expected in parts of central Delhi.

As per a senior police official, special traffic arrangements have been made and a traffic advisory has also been issued regarding the roads closed. The department has also deployed adequate traffic personnel to assist the commuters.