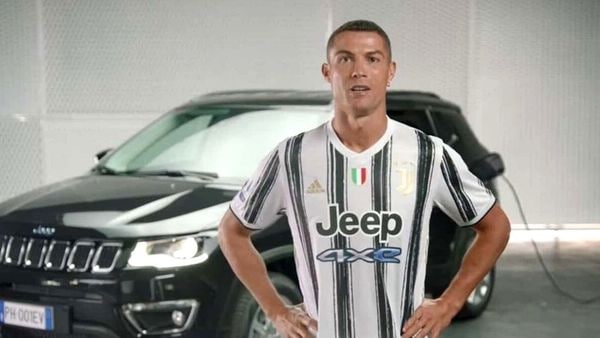 Cristiano Ronaldo, ace striker in the Juventus team, poses with the new Jeep 4xe logo on the uniform.

Jeep, the iconic brand owned by the US-based carmaker Fiat Chrysler, has ratified its alliance with Italian football club Juventus ahead of the new season which kicks off today.

Cristiano Ronaldo, among other key players appeared with a new-look jersey that had Jeep's new 4xe logo imprinted on them. 4xe is Jeep’s global name for its plug-in hybrid electric vehicle technology.

The 2021 Jeep Wrangler 4xe plug-in hybrid was recently unveiled by the carmaker. It delivers up to 25 miles of nearly silent, zero-emission, electric-only propulsion, thanks to a high-tech, 2.0-liter four-cylinder turbocharged engine with two electric motors. The carmaker claims that the hybrid SUV is most capable and eco-friendly off-road Jeep vehicle.

The Wrangler 4xe offers in its electrical component a 17 kWh battery pack with 375 hp of power and 637 Nm of torque. While the Compass and Renegade plug-in hybrids have 11.4 kWh batteries and can reach a maximum power of 240 hp. All 4 × 4 traction.

To show off their new apparel, Juventus players , including world star Cristiano Ronaldo, took part in a photo shoot wearing the “Jeep 4xe" shirt and also posed with a couple of copies of the brand. The same vertical stripe design is kept in a new style.

The strategy is applied in order to emphasise the path towards electrification in which Jeep is advancing as a boost to sustainable mobility, a cause that the vast majority of brands in the industry are taking on. In the case of Jeep, the steps are being taken with plug-in hybrid versions.

It is also a way to strengthen its role as a sponsor to the Italian soccer team, an agreement that was renewed in December 2020, until 2024. This also means an investment of 45 million euros per season for the brand, for an approximate total of 135 million euros.

The relationship between Jeep and Juventus is very close and to date they have been working together for almost a decade. Beyond a commercial alliance, both have much more to do, since Jeep is part of Fiat-Chrysler, whose owners are the Agnelli family, which in turn is in command of the Italian football club.