Tata Motors has been downgraded to more vulnerable to non-payment grade 'B' by S&P Global, citing weaker-than-expected credit metrics.
By : PTI
| Updated on: 03 Apr 2020, 09:49 AM 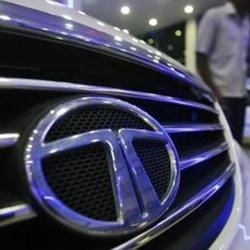 Tata Motors announced that it will have the global premiere of models of some key passenger and commercial vehicles at the Delhi Auto Expo 2018.

S&P Global Ratings has downgraded Tata Motors to more vulnerable to non-payment grade 'B' citing weaker-than-expected credit metrics owing to the disruptions and economic impact from the coronavirus pandemic.

The ratings agency which had earlier rated Tata Motors B has, however, kept the outlook on the company stable.

"The impact of Covid-19 on the global automotive market will make a large dent in the recent good progress that JLR's management has made in steering the business back to profitability and improving credit metrics. In turn, this would delay the improvement we had expected in Tata Motors' credit profile," S&P said in a statement.

It further said the previous 'B ' rating on Tata Motors was predicated on expectation that revenues and profit margins at both Jaguar Land Rover (JLR) and Tata Motors' Indian operations would improve steadily in fiscals 2020-2022.

"Even before the Covid-19 outbreak, JLR's sales volumes for fiscal 2020 were likely to decline, while the Indian operations were affected significantly by structural changes in the commercial vehicle segment and a slowing economy," it stated.

S&P said it has now "altered our assumptions given uncertainty in production volumes and demand following the pandemic. We now forecast Tata Motors' consolidated revenues to decline about 5 per cent in fiscal 2021 following a sharp revenue drop in fiscal 2020."

The ratings agency further said it views positively the management's focus on conserving cash amid the changes in operating conditions.

"We expect consolidated capital expenditure (capex) in fiscal 2021 to be at least 20 per cent below fiscal 2020 levels.

“Management has also identified significant further cost-cutting areas at JLR under "Project Charge ". Even so, we anticipate free operating cash flow (FOCF) will be negative for the next couple of years at least," it added.

Tata Motors' recent announcement to subsidiarize its domestic passenger car business and to explore mutually beneficial partnerships could be positive. However, the plans are at an early stage and are not expected to have a significant impact in fiscal 2021, S&P said.

"The stable outlook mainly reflects our view that Tata Motors will maintain adequate liquidity over the next two years. This would partly mitigate the company's weakening leverage and cash flow-based metrics," the agency said.

S&P further said while negative FOCF is a risk over the period, "we believe Tata Motors has financial flexibility as part of the Tata Group, though the benefits are more pronounced at the Indian operations than at JLR".

On the possibility of further downgrading ratings on Tata Motors, S&P said "a downgrade to 'B-' would largely be the result of a deterioration in Tata Motors' liquidity position".

"In our view, this would be more likely driven by lower financial flexibility and reduced fundraising ability, than a deeper operational decline. That said, a significant underperformance of earnings relative to our current estimates could contribute to this scenario," it said.

In the absence of significant developments, an upgrade in the next 12 months is less likely given the negative outlook on JLR, which has a significant influence on Tata Motors' credit profile, S&P said.

"A rating higher than that on JLR is possible if the Indian operations strengthen appreciably such that JLR has a lower influence on the consolidated financial profile. This is not our expectation in the next two years," it said.