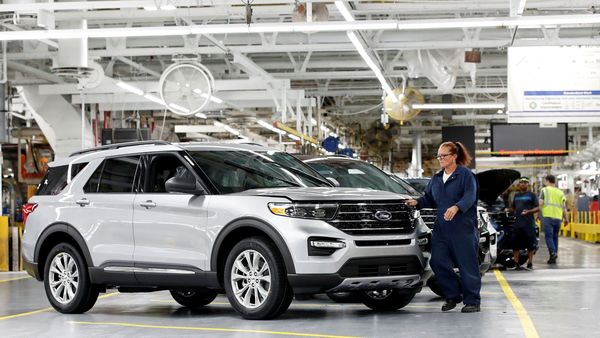 A worker checks a 2020 Ford Explorer car at an assembly plant in Chicago.

Fears of a U.S. sales slowdown in auto showrooms due to the coronavirus outbreak that has spread globally are appearing in analysts' forecasts, but industry executives said the pandemic has yet to affect demand or factory production.

Officials with Detroit automakers General Motors Co, Ford Motor Co and Fiat Chrysler Automobiles NV on Wednesday said there has been no disruption to U.S. production.

Automakers and their suppliers have avoided shutdowns in the United States so far due to parts already en route, as well as suppliers resorting to air shipments or resourcing the supply of parts to different plants, supplier executives and industry consultants said.

GM Chief Executive Mary Barra said last week the No. 1 U.S. automaker's vehicle production was secure from parts shortages "quite far into this month." Suppliers and industry consultants contacted by Reuters echoed that there should be no issues through at least the end of the month.

The coronavirus outbreak, which originated in China last year and causes the sometimes deadly respiratory illness COVID-19, has killed more than 4,300 globally and been reported in about 120 countries.

Kalitta Air, an international air cargo carrier in Michigan that counts auto companies among its clients, is operating its planes 25% more than usual due to heavier demand from customers and the near-term schedule is filled, said Chief Operating Officer Pete Sanderlin. "We're booking business towards the end of April."

"Dana hasn’t had any significant interruptions up to this point, and we have 149 facilities globally," Dana Inc CEO James Kamsickas said in an email statement.

However, that situation could change quickly for suppliers and their customers, said Dan Hearsch, managing director in the auto practice for consultancy AlixPartners.

Meanwhile, analysts are reducing their 2020 sales forecasts for the U.S. market due to the outbreak.

Morgan Stanley analyst Adam Jonas said on Wednesday in a research note he expects the outbreak to send U.S. auto sales down 9% this year as "demand shock" causes consumers to delay large purchases. Before the outbreak, he had expected a decline of 1-2%.

However, auto dealers from across the United States said last week it was business as usual with strong customer traffic in their showrooms, and the situation had not changed so far this week.

"Thankfully, we are well. Nothing has changed with our dealers with respect to the coronavirus," Evelyn Cardenas, CEO of the Central Florida Auto Dealers Association in the Orlando area said on Tuesday. Those sentiments were echoed by the National Automobile Dealers Association.

While sales data from J.D. Power for the first full week of March showed a decline of about 10%, a drop was expected and was not attributable to the epidemic, said Tyson Jominy, a vice president at the research firm.

But where the coronavirus has hit hardest, the pain has been felt, as auto sales last week slid 20% in Seattle - a region badly affected, he added. New York, another state with a high number of infections, has not been hurt yet.

Automakers are due to report first-quarter sales in early April.

As the virus spreads, however, its negative impact will be felt in the auto industry, said Jeff Schuster, LMC president of global vehicle forecasts. "Volatility will remain with us until there is evidence of containment globally, and the lasting effect could spill into 2021."\