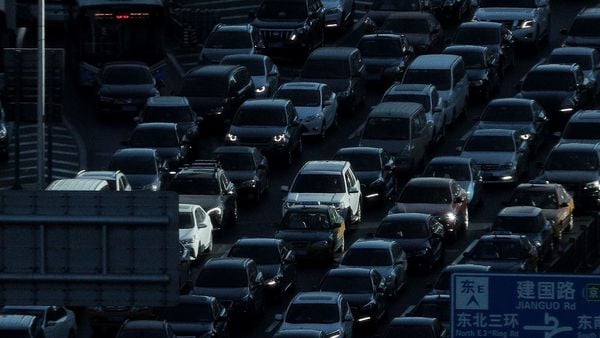 File photo: A beam of sunlight is cast on vehicles on a city ring-road clogged with heavy traffic during the morning rush hour in Beijing.

Electric-vehicle manufacturers in China are seen turning to cheaper batteries to slash costs and meet the needs of drivers in its megacities who don’t need to travel huge distances.

There’s been resurgent interest in lithium-iron-phosphate (LFP) batteries since the middle of 2019 when China started to rein in subsidies that had spurred adoption of more expensive, longer-range units using materials such as nickel and cobalt. The cost-competitiveness, safety and low sensitivity to commodity price dynamics of LFP batteries are boosting their popularity in the country, according to a report by BloombergNEF.

China’s biggest maker of new energy vehicles, BYD Co., said its latest cobalt-free battery will be in a new sports-utility model from the middle of this year. Its Han SUV -- with range of more than 600 kilometres (373 miles) per charge -- will use a LFP battery that matches the range of nickel-cobalt batteries, the company said in a statement.

“It’s simply because LFP batteries provide the best value," Gao Yuan, vice president of Chinese battery cathode producer Pulead Technology Co., said by Wechat. “Also, the visibility of costs is much better. If you ask someone what they think the cobalt or nickel price is going to be in 2025, you would get a long list of caveats."

LFP batteries can be some 20% cheaper than those using nickel, according to Bloomberg New Energy Finance. The LFP chemistry mix is cheaper because it’s simple to synthesize and uses low-cost materials, while other battery types using variations of nickel, manganese, aluminum and cobalt are more complex and use metals with volatile prices.

A building resurgence in LFP in the top EV market shows how battery technology and consumer preferences are far from settled as governments and automakers worldwide navigate the decades-long electrification of the global vehicle fleet.

Nickel-rich batteries have been favored because they enable longer distances between charges -- tackling so-called “range anxiety" that allegedly puts people off electric cars. Contemporary Amperex Technology Co. Ltd. and BYD have both developed new battery pack designs that can increase the driving range of vehicles using LFP, which improves the chemistry’s competitiveness, according to BloombergNEF.

“For megacity people, in Beijing, or in Shanghai, a 150-kilometre, driving range is often enough" and that can be served by LFP batteries, Gao said.

Still, the renewed interest in using LFP batteries may not prove permanent. Demand will rise in the medium-term, according to Morgan Stanley, but ultimately the technology will be replaced as nickel-cobalt batteries become more advanced, with costs expected to fall as much as 20% in the next 3 years.

Elon Musk’s Tesla is in advanced talks with CATL on taking supplies of LFP batteries as it seeks to lower costs, Reuters reported earlier this month. The U.S. company declined to comment. A spokesperson for CATL said “we are able to provide clients suitable and competitive solutions."

China’s EV sector is suffering from a wider slump in auto buying that was evident even before the coronavirus outbreak halted swathes of the country’s economy. The government may prolong remaining subsidies that were due to be phased out by end-2020, people familiar with the matter said last month. But that would still leave intact the cuts that were made last year.

“We have seen a rebound in LFP interest since last fall because now it’s driven by the market and not by government incentives," said Pulead’s Gao. “Subsidies were designed to encourage cars with longer driving range and higher-energy density batteries."