CES 2022: General Motors, Google, Waymo to pull out due to Omicron threat

Some of the other key carmakers scheduled to participate at the Consumer Electronics Show next year are BMW, Hyundai, Stellantis, Mitsubishi and Daimler.
By : HT Auto Desk
| Updated on: 24 Dec 2021, 01:22 PM 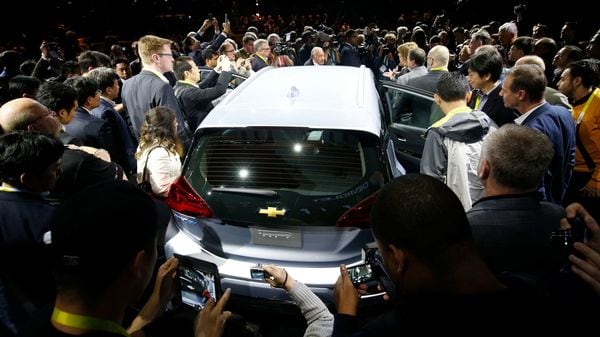 Journalists look over a Chevrolet Bolt EV after it is unveiled during a General Motors keynote address at the 2016 CES in Las Vegas. (File Photo)

General Motors has decided to skip the annual Consumer Electronics Show amid rising concerns over Covid-19 Omicron variant cases across the world. The US-based carmaker announced its decision on Thursday. Waymo self-driving car brand, which is owned by Google's parent company Alphabet, has also decided to stay away from the event, but participate only through digital means.

The four-day Consumer Electronics Show, which had planned for a grand return, is still scheduled to start from January 5 next year.

General Motors was scheduled to unveil its electric Silverado pickup truck globally on January 5. It is not clear whether the event will take place digitally. As of now, Mary Barra, CEO at General Motors, is expected to go ahead with her keynote address over the internet.

General Motors issued a statement on Thursday, which read, "We have decided to move to an all-digital approach with our activation at CES 2022 in January. We are continuing with our plans on January 5 to share our significant company news, including the reveal of the Chevrolet Silverado EV."

On the other hand, self-driving car brand Waymo, owned by Google's parent company Alphabet, has said it will take part at the event virtually. "After careful consideration we have decided to withhold from having a presence on the show floor of CES 2022. We've been closely monitoring the development of the Omicron variant, and have decided that this is the best choice for the health and safety of our teams," a spokesperson with US internet giant Google said.

Some of the other key carmakers scheduled to participate at the Consumer Electronics Show next year are BMW, Hyundai, Stellantis, Mitsubishi and Daimler.