The $300 billion auto-parts and repair industry in the US is facing widespread operational challenges, from spikes in the price of steel and other materials to workforce shortages.
By : Bloomberg
| Updated on: 17 Oct 2021, 03:31 PM 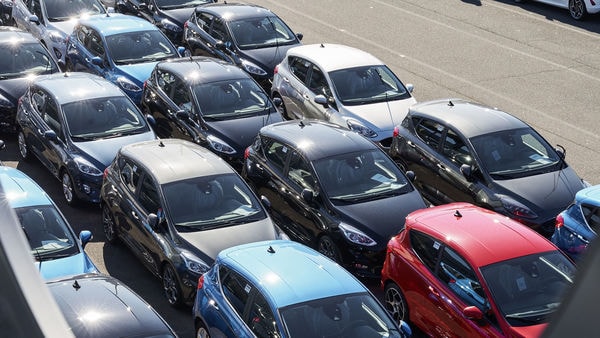 The world’s supply chain woes are bearing down on US auto garages. The challenge of finding spare parts as mundane as oil filters or carpeting has forced repair shops to hoard inventory, find workarounds and plead with customers for patience until a shipment comes in. Typical delays of a day or two have stretched into weeks in some cases, shop owners say.

It’s a self-feeding loop. A global semiconductor shortage has cut the production of new vehicles, leading to a surge in demand and prices of used cars and forcing people to keep their old ones longer. In turn, these vehicles need repairs, which are now increasingly being dragged by supply-chain snarls.

In the Seattle suburbs, garage owner Bryan Kelley waited on parts for 60 to 90 days on two separate occasions while fixing pick-up trucks. One of the parts, a crankshaft position sensor, used to take a half hour to get from the distribution center, said Kelley, owner of Valley Automotive Repair and Electric. The wait got so long that the customer was ready to give up on his Dodge Ram 1500, he said.

“He went as far as to say, ‘I’m going to tow it and buy another truck,’" said Kelley, who’s also chairman of the Automotive Service Association Northwest trade group. “It got compounded when he found he couldn’t just go down and buy one."

The $300 billion auto-parts and repair industry is facing widespread operational challenges, from spikes in the price of steel and other materials to workforce shortages and — like everyone else — delays getting goods unloaded at U.S. seaports, said Paul McCarthy, chief executive of the Automotive Aftermarket Suppliers Association.

No garage is being spared, whether franchise dealers who get their parts from the major automakers, independent warehouses, or small corner garages, McCarthy said.

“This is the most difficult supply-chain environment that I have ever seen," AutoZone Inc. Chief Executive Officer William Rhodes said in a September earnings call. AutoZone is running “the lowest level of in-stock that I can ever remember," said Rhodes, who started his career at the Memphis, Tennessee-based auto-parts retail giant in the 1990s and has been CEO since 2005.

For now, mechanics on the front lines are having to get creative while keeping car owners calm as they break the bad news. It helps when so many of these clients have experienced pandemic-era shortages of all sorts of products in the past year and a half.

In the Philadelphia suburbs, Lisa Matlock’s Nissan Sentra got flooded when Hurricane Ida pummeled the Northeast in early September, leaving the interior a soggy and reeking mess. “I can’t begin to tell you what the smell was like," Matlock said.

Unable to find replacement carpeting, the mechanics at Colket Technical Services in Lansdale, Pennsylvania, did the next best thing by ripping out the existing carpet, having it professionally cleaned and putting it back in.

Matlock was understanding when shop owner Ross Colket explained he couldn’t find carpeting anywhere. As a convenience-store worker, she can’t even find plastic containers for her shop’s grab-and-go sandwiches lately. “I wasn't surprised or flustered that Ross was having trouble finding carpet," Matlock said.

Hoarding has become a common practice for particularly sought-after items. “Oil filters are becoming harder to get, so when I buy them, I buy them in as big of quantities I can get," said River Road Auto Service manager Danny Tomasian in Bethesda, Maryland.

The auto repair delays seem particularly acute in the U.S. because spare parts produced in Asia get tangled in the global shipping clog and cargo jams at seaports.

Xu Haidong, a vice chief engineer at the China Association of Automobile Manufacturers, said production and supply of parts are sufficient in his country. In Japan, some electronic parts are becoming harder to find, such as navigation systems, but other parts are readily available, said Hiroshi Arai, secretary general of the Japan Autoparts Wholesales Association.

For now, the U.S. aftermarket parts industry is bracing for shortages possibly into next year, said McCarthy of the suppliers association. Colket, the Philadelphia-area garage owner, is taking it in stride. He even has a nickname for the persistent delays: “We lovingly refer to it as intergalactic backorder."