Cars are uninvited guests when Americans dine in parking lots

As restaurants in the US reopened after days of lockdowns for low-risk dining in outdoor spaces, the automobiles and nature showed up without reservations.
By : Bloomberg
| Updated on: 06 Aug 2020, 08:00 AM 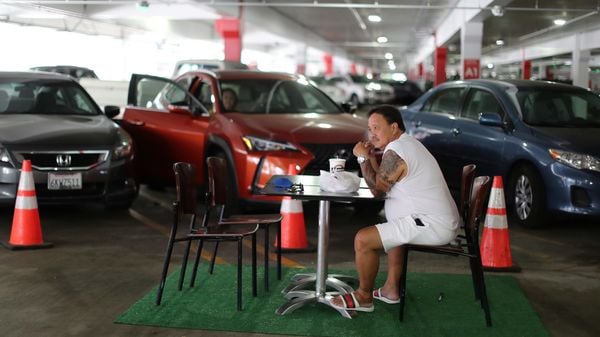 Renato Pinera eats lunch in a dining area set up in the Glendale Galleria mall parking garage, as the global outbreak of the coronavirus disease continues, in Glendale, California, US.

Outdoor spaces hastily fancified for low-risk dining are keeping thousands of US restaurants from closing permanently. But crashing the dinner party are tropical storms, rats -- and the occasional out-of-control vehicle.

On July 5, five people were injured when a sport-utility vehicle crashed into sidewalk seating outside 12 Corazones restaurant and bar in Queens, New York. Over five weeks, vehicles bulldozed into temporary dining areas in Manhattan, the Brooklyn and the Bronx -- missing customers and staff, but causing thousands of dollars in damage.

Such is the cost of trying to provide gracious service amid a national backdrop of hard-to-disguise highways, Dumpsters and chain-link fences.

“It’s not the Via Veneto," Menna said. “A plastic palm tree just doesn’t do it."

Covid-19 has decimated restaurants across the country. In an industry that reported $863 billion in sales last year, four in five independent dining spots expect to close permanently without more federal cash assistance, according to an April survey by the James Beard Foundation and the Independent Restaurant Coalition.

The outdoors and summer’s long, warm days were supposed to be a lifeline. Restaurant owners rehired staff and bought patio furniture, tents and safety barriers. But as hungry crowds ended months of going-out withdrawal, the automobile and nature showed up without reservations. In Waldwick, New Jersey, on July 10, unoccupied tables and tents were scattered throughout the parking lot of Nellie’s Place by a car whose driver had fallen unconscious after a coronavirus test. The family-owned spot, famous for its thin-crust pizza, opened the next day with a new attraction: a concrete barrier.

Behind the fortifications, it’s “making enough money to pay our bills," co-owner Karen Schultz said in an interview.

At the Havana Cafe in the Bronx, owner Ruben Rodriguez was spending more than $150,000 on repairs after a car rammed hand-built plywood barriers, sidewalk seating and the storefront after hours on June 26.

“We see it as something else to come back from," Rodriguez said in an interview.

(Also read: From weddings to Starbucks and more, how cars are the new social hub)

Even the day-to-day can be tough going. Tropical Storm Isaisis led much of the East Coast to pause outdoor activities, with some mayors ordering restaurants to suspend service, dismantle tents and bring tables and chairs indoors. The hurricane season, through November, is forecast to be busy.

But restaurateurs have little choice other than to set up outdoors in states that have blocked or limited indoor service, such as California, New York, New Jersey, Florida, New Mexico, Washington, Pennsylvania, Virginia and Michigan. Such restrictions have helped slow the spread of a virus that has sickened at least 4.8 million people and killed more than 156,000.

Kowloon, a landmark 1,200-seat restaurant north of Boston, has made a hit of parking-lot movie nights just off six-lane Route 1. Rented barriers surround lawn chairs on artificial turf patches, where customers order Cantonese, Szechuan, Thai and Japanese cuisine and watch “Grease" and “Raiders of the Lost Ark" projected on a screen. 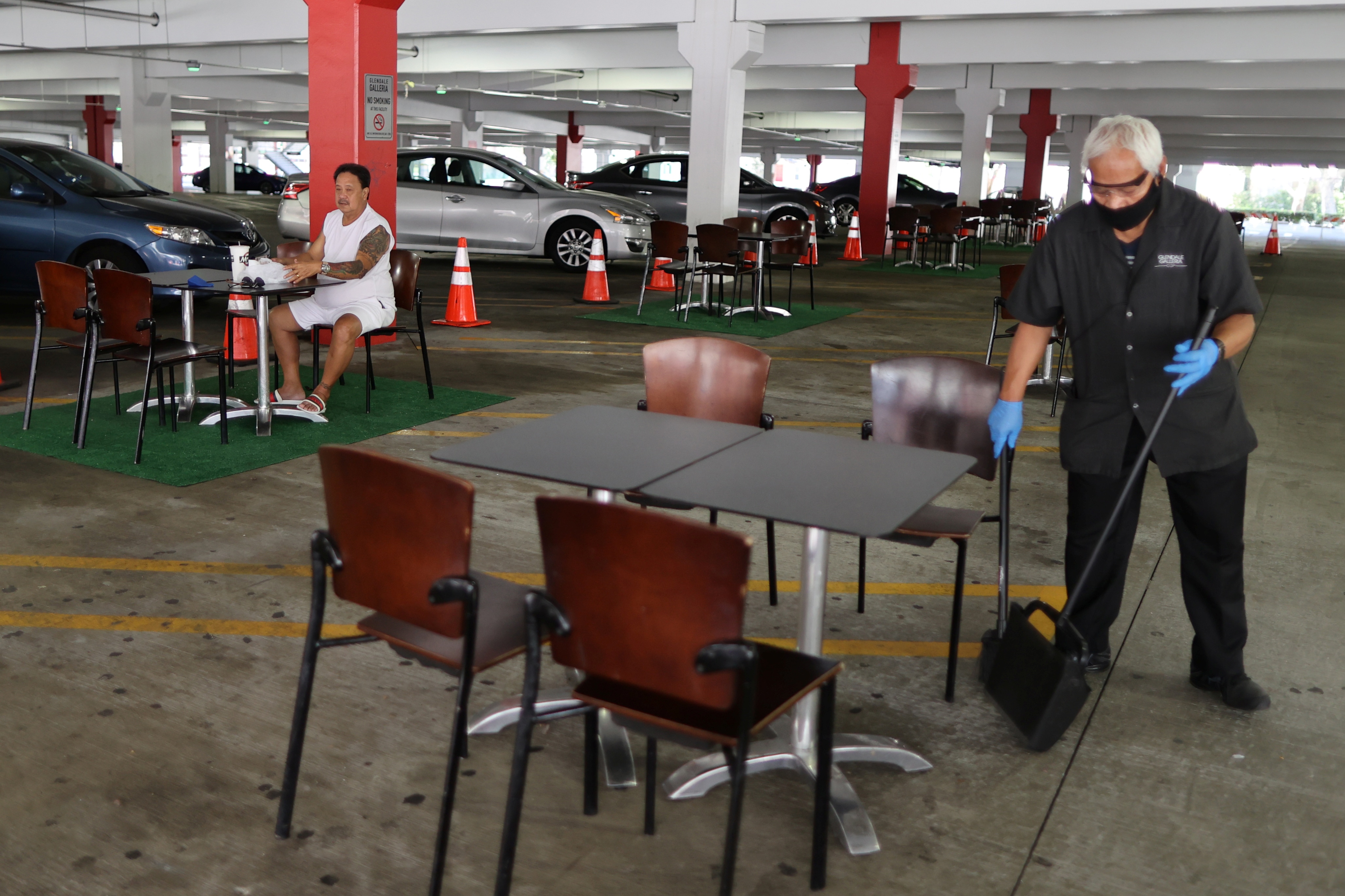 “What worries me is come fall, when the weather becomes colder," co-owner Bob Wong said by telephone. “What happens when people come inside?"

New York City’s Open Streets program, with more than 60 miles car-free through the pandemic, has at least 9,000 participants, about one-third of the pre-pandemic restaurant total, according to the city transportation department.

Open-air dining has employed at least 80,000 people, Mayor Bill de Blasio said Monday, and officials are brainstorming an extension beyond Oct. 31 and a return June 1. A day earlier in Park Slope, he said, he spotted “a beautiful New York City moment" of diners distancing and enjoying themselves.

Non-humans are enjoying the meals as well. In New York, some restaurateurs have complained about rats showing up at outdoor venues. The US Centers for Disease Control and Prevention has warned that rodents may become aggressive as they hunt for food after months of scarce waste-bin scraps.

In all, turning America into some sort of European streetscape isn’t easy. The task was tricky even for Europe: It took decades, starting in the 1960s, for Copenhagen’s transformation to pedestrian and cyclist paradise, its medieval streets blocked to motor vehicles and sowed with coffee shops, fine dining, flea markets and entertainment.

In the US, beholden to cheap gasoline and interstate highways that ushered in suburban life, the crashes point to an essential fault with car culture, according to Danny Harris, executive director of the New York City-based safe-streets group Transportation Alternatives.

“When a city gives an invitation for people to get out and take part, part of that is to make sure it’s safe and equitable and dignified," Harris said in an interview.

Philadelphia, Chicago and Boston closed some streets. The Los Angeles-area Glendale Galleria mall closed one level of a parking garage, and beckoned diners with a decor heavy on fluorescent orange traffic cones. In Asheville, North Carolina, a pop-up grill set up at McCormick Field, a minor-league ballpark.

In 90 degree-plus temperatures on Saturday in Oklahoma City’s Paseo Arts District, Holly Bray and a handful of friends gathered for dinner and beers at Red Rooster, operating since 1937. Decorated flower pots on wheels were all that separated their table from a four-way intersection as traffic crawled by, stopping and starting in a 25-miles-per-hour zone.

Support for such places all over the country, Bray said, showed that people “are just desperate to get out and be around each other."