The US-Mexico-Canada Agreement requires that for tariff-free access, vehicles must contain 75% North American content by value, up from 62.5% under the 26-year-old North American Free Trade Agreement, which it replaces.
By : Reuters
| Updated on: 01 Jul 2020, 09:38 AM 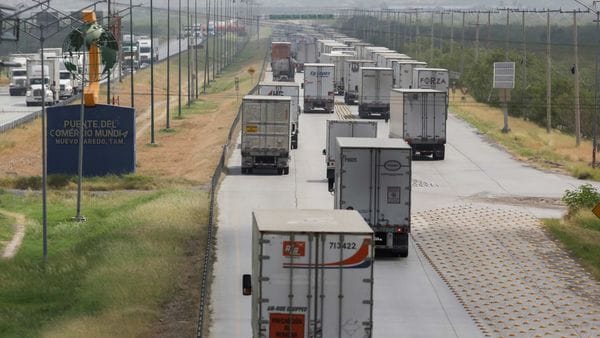 Trucks wait in a long queue for border customs control to cross into the US, at the World Trade Bridge in Nuevo Laredo, Mexico June 30, 2020.

Automakers and their suppliers may be able to escape penalties for compliance infractions for up to a year under a new North American trade deal that takes effect on Wednesday, a US Customs and Border Protection official said on Tuesday.

The US-Mexico-Canada Agreement requires that for tariff-free access, vehicles must contain 75% North American content by value, up from 62.5% under the 26-year-old North American Free Trade Agreement, which it replaces. The USMCA also requires that 40% to 45% of a vehicle's value come from "high wage" areas, namely the United States and Canada.

The percentages are determined differently than under NAFTA, requiring companies to change how they certify compliance, and there are new mandates to use North American-made steel and aluminum.

(Also read: Why Mexican auto lobby is 'up in arms' amid lockdown woes)

Brenda Smith, CBP's executive assistant commissioner for trade, told reporters on a conference call that automakers would have until the end of 2020 to fully certify that their current production and future production plans can comply with the new rules under a three-year or five-year phase-in period.

But for the first six months of 2021, she said the agency will apply an "informed compliance period" during which it will advise companies on how to correct compliance errors, rather than imposing punitive duties on products of companies actively trying to comply.

"Our expectation is that they are meeting the rules but recognize that a certain amount of flexibility is warranted during a transition period. We are not in the role of playing 'gotcha,'" Smith said.

The compliance grace period was first revealed to automotive suppliers last week, said Ann Wilson, a senior vice president with the Motor and Equipment Manufacturers Association. She told Reuters that USMCA compliance would be hard on smaller suppliers already facing liquidity issues because of the coronavirus.

"We are pleased that we’ve got a little bit more time to come up with a compliance document, but it’s not going to be without challenges," she said.