As autoworkers get back to work in the US, a number of safety measures are being followed to avoid any coronavirus infection.At a Fiat Chrysler pickup truck assembly plant in Warren, outside Detroit, workers entered a giant white tent with a sign reading, “Let's restart and keep each other safe."
By : PTI
| Updated on: 19 May 2020, 13:16 PM

File photo: Employees line up at the entry social distancing barriers inside a tent before the first day back at work at the Fiat Chrysler Automobiles Warren Truck Assembly Plant in Warren, Michigan, U.S.

More than 130,000 autoworkers returned to factories across the US for the first time in nearly two months on Monday in one of the biggest steps yet to restart American industry, while an experimental vaccine against the coronavirus yielded encouraging results in a small and extremely early test.

Stocks rallied on the vaccine news and signs that the worst of the crisis has passed in many countries.

The Dow Jones Industrial Average soared about 900 points, or nearly 4 per cent.

In a surprise announcement, President Donald Trump said he's been taking a malaria drug to protect against the virus even though his own administration has warned it should only be administered in a hospital or research setting because of potentially fatal side effects.

Automakers from Detroit's Big Three — Fiat Chrysler, General Motors and Ford — to Honda and Toyota put screening procedures in place at the dozens of factories that reopened from the Great Lakes states south to Tennessee and Texas and out west to Tesla's factory near the San Francisco Bay.

Some Detroit automakers started cranking out vehicles Monday, but it will take longer to fully restart other plants. Workers appeared reassured by the precautions.

At a Fiat Chrysler pickup truck assembly plant in Warren, outside Detroit, workers entered a giant white tent with a sign reading, “Let's restart and keep each other safe."

They had their temperatures checked and answered questions on whether they had Covid-19 symptoms.

(Also read: This Ford Motor plant gets ready for a visit from US President Donald Trump)

“I feel safer than being anywhere at any stores, because they got the screening and everything," said Ann'alazia Moore, a janitor at the factory. 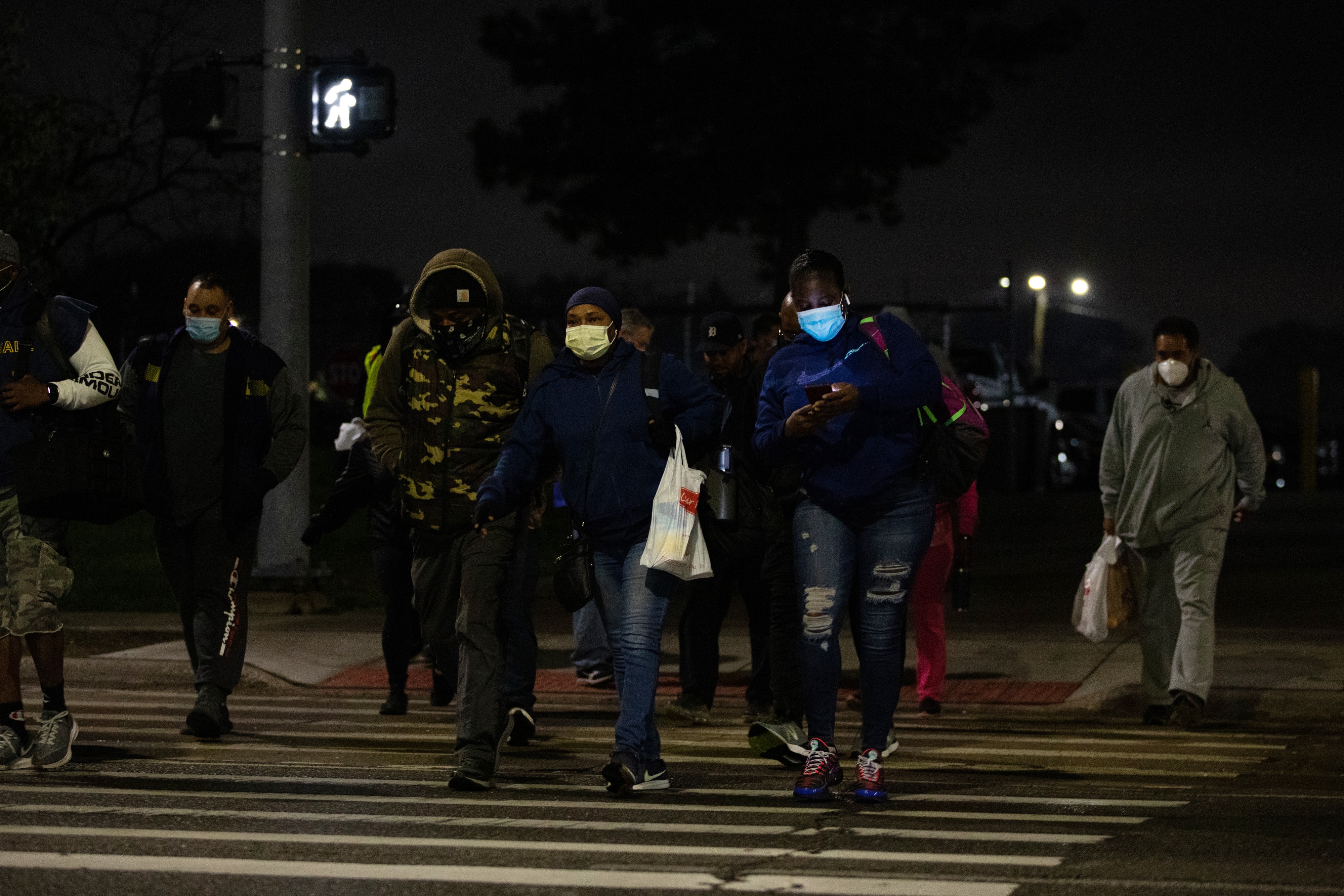 Employees wear protective face masks as they arrive before the first day back at work at the Fiat Chrysler Automobiles Warren Truck Assembly Plant in Warren, Michigan, U.S. (Bloomberg)

Cole Stevenson, who installs steering wheels at a Ford pickup truck plant in Dearborn, Michigan, said, “The parts of the plant where people would be closer together, they've put up a lot of partitions. You can tell they've taken tape measures to just about any surface two people would need to be near each other."

They were found to have antibodies similar to those seen in people who have recovered from Covid-19.

Further studies on the vaccine's safety, effectiveness and optimal dosage still need to be done. But with people desperate for any sign of progress, the findings caused excitement on Wall Street.

Worldwide, about a dozen vaccine candidates are in the first stages of testing or nearing it.

Health officials have said that if all goes well, studies might wrap up late this year or early 2021.

The malaria drug that Trump says he's been taking daily “for about a week and a half now" has not been shown to combat the coronavirus.

“I started taking it, because I think it's good," Trump said.

“I've heard a lot of good stories." Despite warnings from health experts that the virus could make a resurgence, many states have eased lockdowns under pressure from Trump to save businesses and livelihoods. General Motors Co employees test a fever-scanning thermal camera from Flir Systems Inc at a facility in Warren, Michigan, as part of a new procedure for employees entering GM's factories as they reopen after being shut by the outbreak of the coronavirus disease. (VIA REUTERS)

US unemployment surged in April to 14.7%, a level not seen since the Depression.

Health authorities will be watching for a second wave of infections and worry Americans will disregard social distancing over Memorial Day weekend, the unofficial start of summer.

There were already large crowds last weekend: Connecticut had to close beaches when they reached capacity under new rules, and people packed the Virginia Beach oceanfront even before restrictions were relaxed.

Deputies north of Orlando, Florida, say they were hit with cups of alcohol, bottles and bar stools after making arrests at a weekend block party with an estimated 3,000 people.

Walt Disney World posted a warning about Covid-19 as it prepares to allow some third-party shops and restaurants to reopen this week.

Bars, day cares and zoos were the latest parts of Texas' economy to reopen with social distancing measures.

By June, summer camps and youth sports will be allowed in the second-most-populated state.

One of California's largest tribal casinos reopened with customers getting their temperatures taken and being ordered to cover their faces, while every other slot machine was turned off to keep people separated.

A large turnout meant many were still playing less than 6 feet (2 meters) apart.

Ronda McLauchlan lined up at 7:30 am before going to work as a painting contractor because “it's all about freedom."

Europe also has pushed ahead with reopening, allowing people into the Acropolis in Athens, high-fashion boutiques in Italy, museums in Belgium, golf courses in Ireland and beer gardens in Bavaria.

More than 4.7 million people worldwide have tested positive for the virus and over 318,000 deaths have been recorded, including about 90,000 in the US and over 160,000 in Europe, according to a tally by Johns Hopkins University.

Those figures are believed to understate the true dimensions of the outbreak because of limited testing, differences in counting the dead and concealment by some governments.

In other developments, the World Health Organisation bowed to calls to launch an independent investigation into how it responded to the coronavirus.

Trump has repeatedly attacked both WHO and China, claiming the UN agency helped Beijing conceal the extent of the outbreak in its early stages.