The incident took place in Groningen after the owner removed the Volkswagen EV from the charger.
By : HT Auto Desk
| Updated on: 23 Aug 2021, 09:25 AM 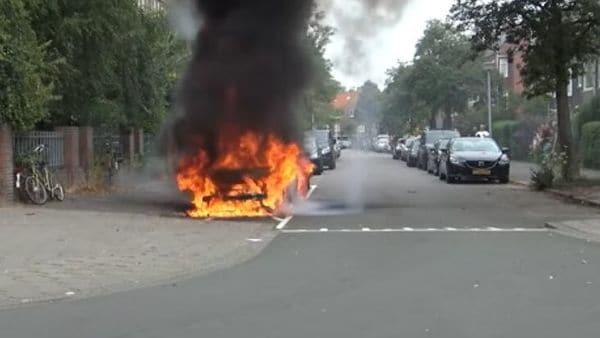 Screengrab from the video posted on YouTube by Meternieuws.

An incident of a Volkswagen ID.3 that burst into flames in the Netherlands has come to light after the owner disconnected the electric vehicle from the curbside charger. This accident took place in Groningen where the owner of the EV, after charging the vehicle, was about to put a child in the car when the person observed that smoke was coming out of the ID.3, said media reports. Following this, the electric car caught fire and then was completely wrapped in flames.

Since both the passengers were able to evacuate the vehicle in time, no injuries have been reported. The Volkswagen electric vehicle, however, was burnt beyond repair. Firefighters reached the scene swiftly but were unable to save the electric hatchback and whatever was left, was later towed away.

Volkswagen reportedly said that it is going to minutely investigate the wreckage to ascertain the exact reason that led to the fire.

Earlier this year, Volkswagen launched an all-new version of the ID.3 electric hatchback with a lower starting price but featured the same range as its premium model. The cheaper ID.3 version come in two variants, Pro and Pro Performance. The automaker also started series production of ID.3 electric vehicles at the Dresden factory in Germany.

Concerns over EVs catching fire, however, are likely to be a sore point for companies and many have resorted to compensating owners who have been victims of such incidents - either by replacing the vehicles or by returning buying costs.