Bugatti makes a comeback in GP Ice Race after 60 years 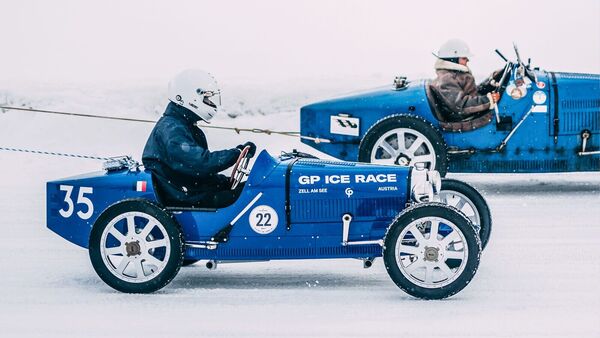 This year's ice race named ICEolated was organised in Zell am See, Austria.

Bugatti recently participated in the GP Ice Race that took place this year after over 60 years after its maiden debut. A Bugatti Type 51 and a Bugatti Baby II – based on Type 35 – were the first Bugattis to take part in the event since 1960. This year's ice race named ICEolated was organised in Zell am See, Austria and it did not include spectators due to Covid-19 restrictions.

The luxury automaker shared the Bugatti Baby II that was created by The Little Car Company was introduced as the ‘safety car’ for the event, despite its smaller than usual scale. The former was based on the Bugatti Type 35 which the company regards as the most successful racing car of all time. The vehicle appeared as a specially-commissioned ‘Ice Spec’ form.

The model had three variants back then namely Base, Vitesse and Pur Sang. The Pur Sang variant painted in French racing blue colours was used in the ice race. It also had a number of modifications that helped it to tackle the icy surfaces of the event. Bugatti informed the car boasted studded tires, limited-slip differential, a 1930s-inspired racing livery with GP Ice Race branding and safety car-style hazard lights. The vehicle led cars out on track before the start of the Ice Race GP, added the French marque.

(Also read | What speed limit? Millionaire, 58, may be jailed for racing supercar at 417 kmph)

Bugatti shared all versions of its Baby II model have a fully electric powertrain, high-performance hydraulic brakes and selectable driving modes. It offers rear-wheel drive to the user, added the company.