While data shows firms such as Uber and Ola are popular with younger consumers more comfortable with shared mobility and digital trends, analysts say the auto industry’s problems run deeper than that -- and it is facing more serious bumps in the road.
By : New Delhi
| Updated on: 15 Sep 2019, 12:26 PM 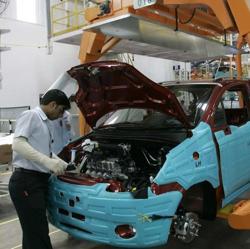 With a population of 1.3 billion people, India is the world’s fourth-largest car market and one where owning a vehicle is as much a status symbol as a means of transport.

When finance minister Nirmala Sitharaman claimed that a preference by millennials for ride-hailing apps was contributing to a painful slump in car sales, it sparked an online backlash from furious youngsters.

They started a campaign using ironic hashtags such as #BoycottMillennials and #SayItLikeNirmalaTai last week to push back against older generations blaming them for today's problems in society.

While data shows firms such as Uber and Ola are popular with younger consumers more comfortable with shared mobility and digital trends, analysts say the auto industry's problems run deeper than that -- and it is facing more serious bumps in the road.

With a population of 1.3 billion people, India is the world's fourth-largest car market and one where owning a vehicle is as much a status symbol as a means of transport.

But the country's once-booming auto sector -- seen as an important barometer of overall economic health -- is in the slow lane, with sales slumping for the 10th-straight month in August.

"The minimum (priced) car that you can get nowadays starts from six to seven lakhs ($8,500 - $9,800)," university student Somya Saluja told AFP. "So it's much easier to pool-in rather than to buy a new car."

Watch: Decoding the auto sector meltdown: Causes, effects and the way ahead

Still, Avanteum Advisors managing partner VG Ramakrishnan told AFP the key reason for the drop in car purchases was economic. "I think the slowdown is primarily because consumer confidence is low and income growth has really been impacted in the last couple of years," he told AFP.

India's economic growth slowed for the fifth-straight quarter in April-June to reach its weakest pace in five years. Banks are also more reluctant to lend owing to a liquidity crunch caused by the near-collapse a year ago of IL&FS, one of India's biggest shadow banks -- finance houses responsible for significant consumer lending.

There are also extra production costs caused by new rules requiring cars to be compliant with emissions and safety standards, while a 28 percent goods and services tax (GST) introduced in 2017 has dampened demand, analysts said.

"To put things in perspective, if you buy a car in India, at least 40-45 percent of costs go to the government in terms of taxes and registration charges and so on."

A year ago, India displaced Germany to become the world's fourth biggest car market, having clocked up annual sales growth above seven percent for several years.

But the promising growth ride is screeching to a halt, with passenger car sales tumbling this year, including a 41 percent drop last month -- the worst since records began more than 20 years ago.

Aside from passenger cars, sales of commercial vehicles, motorcycles and scooters have also been hammered.

With the industry -- a major employer in India -- contributing more than seven percent to total GDP and almost half of manufacturing GDP, the potential fallout from an extended slowdown is sending shockwaves through the economy.

Manufacturers are reducing production and cutting jobs, which is also affecting related industries such as auto component manufacturing and at dealerships, totalling about seven percent of India's total workforce, Bendre said. "The entire ecosystem is huge -- around 20 percent of the population could be dependent on the auto sector," he added.

In a bid to boost sales Sitharaman has lifted a ban on government departments purchasing new vehicles, but automakers say she needs to do much more -- such as cutting GST to 18 percent ahead of the festive season, traditionally a bumper sales period.

With India home to 22 of the world's 30 most polluted cities, according to Greenpeace, any sales incentives have to factor in the environmental crisis, Ramakrishnan said.