Bengaluru's first electric bus was unveiled by B Sriramulu, state transport minister of Karnataka, on Thursday.
By : HT Auto Desk
| Written By : Sabyasachi Dasgupta
| Updated on: 01 Oct 2021, 11:14 AM 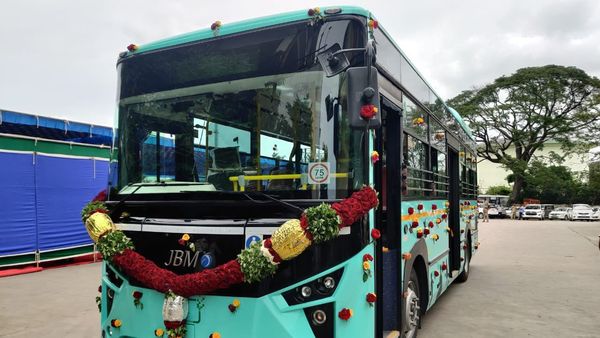 The electric bus is 9 meters in length and can seat up to 33 passengers besides the driver. It has a range of about 120 kms on single charge and has a top speed of 70 kmph. The bus can be charged up to 60 per cent within 45 minutes through a fast charging unit.

There are two CCTV cameras at the front and rear of the bus. The front and center have two automatic gates, with ample space for passengers to climb and descend the bus comfortably.

There is a safety button for 1 plus 1 seating. If there are any unpleasant incidents during travel, the alarm will sound to the driver as soon as the passenger presses this button. This allows the driver to park the bus immediately.

B Sriramulu, Transport Minister of Karnataka, said that this is the first among 90 electric buses to hit the roads of Bengaluru soon. These buses will come at a cost of ₹130 crore.

The electric bus will first go through trial runs after getting a permit from the Transport Department. The minister said that these buses are being leased by the National Thermal Power Corporation Vypar Vidyut Nigam. He also said that the state plans to add another 300 electric buses in the coming days.

Checked out the first electric bus that will be launched soon in the state and by @BMTC_BENGALURU in Ward 37 Kengeri, Bengaluru, today. pic.twitter.com/aIfpOUX1CJ

“Our govt is dedicated to ensure people get the best transport facilities. In addition, electric buses are being introduced in larger numbers to protect the environment. Request all people to make best use of this transport facility and also help reduce traffic congestion," said Sriramulu after inspecting the electric bus at Ward 37 Kengeri in Bengaluru.

Sriramulu also said that the state government will add 10 more electric buses in the next two months.