The DBX, Aston Martin's first SUV, contributed to more than half of the British luxury carmaker's vehicles sold till June this year.
By : HT Auto Desk
| Updated on: 28 Jul 2021, 01:17 PM 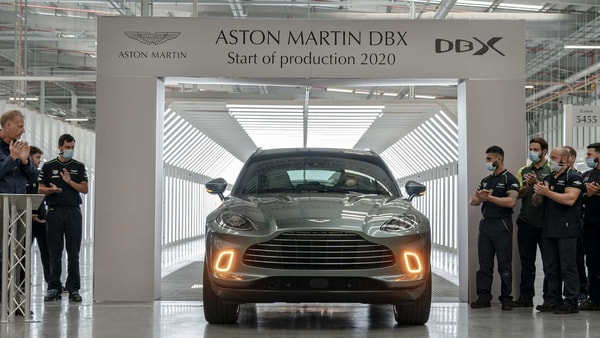 British luxury carmaker Aston Martin reported a jump of more than 200 per cent in its revenue in the first six months of the year. The company said on Wednesday that its revenue so far in 2021 has more than quadrupled in the first quarter of the ongoing financial year.

The cherry on the cake has been the sale of its first ever sports utility vehicle DBX. The SUV has contributed to more than half of the British luxury carmaker's vehicles sold till June this year. Aston Martin sold 2,901 vehicles between January and June this year.

The SUV is powered by a 4-litre, twin-turbo V8 engine sourced from Mercedes-AMG, that produces an output of 550 PS of power and 700 Nm of torque. The DBX was launched in India earlier this year at ₹3.82 crore (base price, ex-showroom).

Aston Martin's best-selling car helped its revenue shoot up to 274.4 million pounds (roughly converted to ₹2,832 crore) from merely 57.2 million pounds (around ₹590 crore) just a year ago. This comes as a welcome relief for James Bond's favourite car brand which has been facing tough times to meet expectations and cash crunch, before fresh investment from billionaire Lawrence Stroll last year saw it breathe a bit easy.

Lawrence Stroll, Executive Chairman of Aston Marti Lagonda, said, "Building on the success of DBX, our first SUV, we have since delivered two more new vehicles and with more exciting product launches to come we are well positioned for growth."

Tobias Moers, Chief Executive Officer at Aston Martin Lagonda, said, "We’ve delivered everything that we promised that we would deliver in the first half. The business has stabilized and now it’s about the growth story and delivering the products that we promised as well."

Aston Martin started the production of the DBX SUV last year. The carmaker has also planned to introduce an electrified and hybrid avatars of its successful SUV.