Aston Martin with Girard-Perregaux, a luxury Swiss watch manufacturer, has produced a watch called Tourbillon with Three Flying Bridges.Only 18 pieces of this limited edition watch will be manufactured.
By : HT Auto Desk
| Updated on: 06 Jun 2021, 08:58 AM 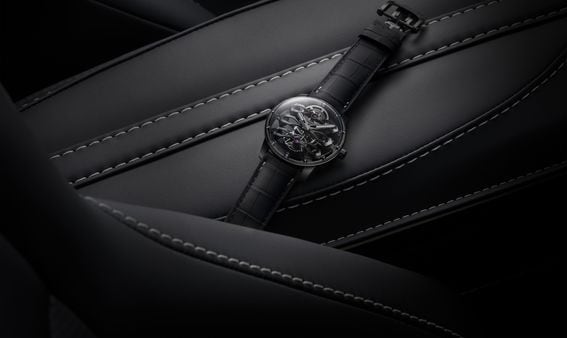 Tourbillon with Three Flying Bridges will have only 18 pieces.

Aston Martin has come up with its version of a wristwatch. The British luxury sports carmaker has tied up with Girard-Perregaux, a Swiss watch manufacturer, to craft a luxury watch called Tourbillon with Three Flying Bridges. This model is a contemporary take on the iconic Three Bridges pocket watch from the 19th century.

This is a skeleton watch constituting grade five titanium, a hypoallergenic alloy selected by the automaker, which gives the watch a stealthy appearance. The design of the straps has been inspired by Aston Martin racing cars from the past. A sapphire crystal box has been positioned at the front of the house and the rear in such a way that light can illuminate the interior of the case thereby facilitating readability.

The three bridges, an iconic signature of Girard-Perregaux, are made of titanium and help to spin the dial. The luxury watchmaker has created the movement within the watch in such a way, that the interior components together give an appearance of levitation and, hence the name 'Flying Bridges'. The tourbillon cage with a mere 10mm diameter, is composed of 79 components which collectively weigh only 0.25 grams.

The CEO of Girard-Perregaux Patrick Pruniaux said that the collaboration with Aston Martin is a sheer pleasure. “We are delighted to partner with Aston Martin, entrusting their team with arguably our most iconic timepiece, delivering a fresh perspective on Haute Horlogerie. Rarely do we work with others to reinterpret the Three Bridges, however, on this occasion, we have made an exception, mindful of Aston Martin’s prowess for design," he said in a press release.

Aston Martin executive vice president and chief creative officer Marek Reichman said that it was a challenge to merge the ethos of engineering of Aston Martin with Girard-Perregaux's 230 years of designing excellence. “That said, good design is good design, whether it is a watch or a car, the principles remain the same. I’m delighted with the finished watch and congratulate everyone who worked on this project as this collaboration has produced a timepiece of great beauty," he added.

The limited-edition Tourbillon with Three Flying Bridges will have only 18 pieces and can be bought worldwide in all authorised Girard-Perregaux retailers.