Petrol and diesel prices were increased by 25 paisa on Wednesday.Both the auto fuel prices have been increased for ninth day in a row.
By : HT Auto Desk
| Written By : Mainak Das
| Updated on: 17 Feb 2021, 10:09 PM 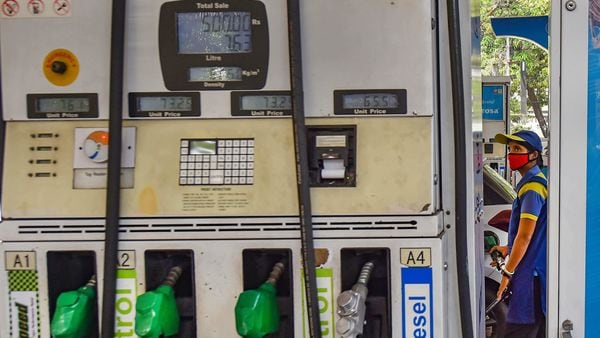 Increase in international crude pricing is directly impacting the prices of petrol and diesel in India.

On a day when petrol price crossed the ₹100 per litre milestone in Rajasthan after the ninth consecutive fuel price hike, Prime Minister Narendra Modi on Wednesday said that the government is aiming to reduce energy import dependence. He also stated that the middle-class of the country would not have been burdened if the previous governments had focused on reducing the energy import dependency. On Wednesday, prices of both petrol and diesel were increased by 25 paise.

(Also Read: Fuel prices rise for 9th day in a row. Petrol, diesel up by 25 paise each)

After the latest price hike on Wednesday, petrol has breached the mark of ₹89.54 per litre in Delhi, while the diesel rate has surged to ₹79.95 in the national capital.

While mentioning that India imported more than 85% of its total oil requirement in the FY20 and nearly 53% of the total natural gas requirement, PM Modi didn’t spare a word on the relentless increase in retail fuel prices that are directly linked to the international crude oil rates. "Can we so import-dependent? I don't want to criticise anyone but I want to say had we focussed on this subject earlier, our middle-class would not have been burdened," PM said.

Prime Minister also said that his government is sensitive to the concerns of the middle-class and has focussed on raising the share of ethanol mixing in petrol. This move would reduce the air pollution level and reduce the share of the crude oil import as well. As Modi said, ethanol extracted from sugarcane will also help farmers with an alternate source of income. However, despite the government’s focus on increasing usage of ethanol-blended petrol the oil marketing companies failing on that target. This would result in the blending programme target likely to fall short.

The central government launched its ambitious ethanol blending programme (EBP) target of achieving 10% ethanol blending in petrol by 2022 and 20% blending by 2025. The target is about to be jeopardised by huge miscalculations by oil marketing companies (OMCs).

The fuel price in India includes excise duty, VAT, and dealer commissions. All of these are added to the actual price, resulting in the retail price of petrol or diesel becoming nearly double. To put it simply, if someone is paying an amount of ₹100 for one litre of petrol, the actual amount minus all the taxes and cess is around ₹50.

Interestingly, while pointing finger to the previous governments, the government is not thinking about reducing excise duty in fuel anytime soon. Union Oil Minister Dharmendra Pradhan has recently told in Parliament that the government is not considering a cut in excise duty in fuel in near future. However, such a move could cut the price drastically and give relief to the common people.

The upward journey trend of petrol and diesel in a row started after the Union Finance Minister announced the imposition of agriculture infrastructure cess of ₹2.5 on petrol and ₹4 on diesel in Budget 2021. This resulted in an additional burden over and above the spiralling internal crude pricing.

Being an import-dependent country for its fuel requirement, the price volatility in the international market directly impacts the pricing of fuels in India. For the last couple of days, the price of petrol and diesel are increasing relentlessly pushing the pricing of auto fuels to a record high. This is impacting the motorists directly as they have to shell out a large chunk of money for buying petrol or diesel.