Brandenburg, a state surrounding Berlin, has high hopes that Tesla's arrival could bring thousands of high quality jobs.
By : AFP
| Updated on: 15 Feb 2020, 09:43 AM 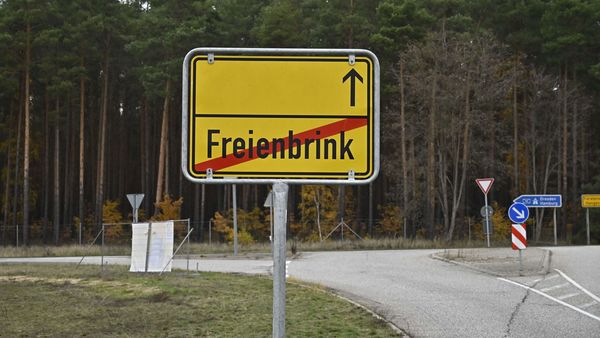 (FILES) This file photo taken on November 13, 2019 shows a place-name sign of Freienbrink, in the municipality of Gruenheide (Mark) of the Oder-Spree county, where Tesla is set to build the new car factory, near Berlin, eastern Germany. - US electric car giant Tesla began clearing forest for its first European "Gigafactory" near Berlin on February 13, 2020, and is now racing against the clock to rehouse ants, birds and hibernating bats. (Photo by Tobias SCHWARZ / AFP)

US electric car giant Tesla began clearing forest for its first European "Gigafactory" near Berlin Thursday, and is now racing against the clock to rehouse ants, birds and hibernating bats.

Workers have started clearing a 92-hectare (227-acre) area of forest at the site in Gruenheide in Brandenburg state after Tesla received the green light from authorities last month.

But after concerns from environmentalists, Tesla has announced measures to relocate wildlife from the affected area, according to reports in various German media this week.

The company will have to relocate "forest ants, reptiles and five bats", Tagesspiegel daily wrote Wednesday.

According to the Sueddeutsche Zeitung, numerous ant colonies would be dug out with "shovels and little diggers" and relocated way from the plot.

Tesla spokespeople could not immediately be reached for comment on the plans.

According to local media, the company has also promised to hang 400 nesting boxes in the area, as deforestation will rob a number of birds of their homes.

But with the factory intended to open in 2021, the car giant faces a race against time to clear the forest and relocate the animals.

Birds will return to nest in the trees from March onwards, and the bats are set to wake from hibernation and begin mating around the same time.

Germany's Nature and Biodiversity Conservation Union (NABU) warned that moving the bats in particular would not be easy.

"To disturb the bats as little as possible, they will have to be moved during hibernation," Christiane Schroeder, director of NABU's Brandenburg branch, told the Berliner Zeitung daily last month.

Tesla had "approached conservationists early and proactively," said the Greens party politician. Co-founder Elon Musk had himself proposed a plan to plant three times as many trees as would be cut down, he added.

But critics have claimed that deforestation could harm wildlife and endanger the drinking water supply.

And environmental protection is not the only hurdle Tesla have faced in Gruenheide.