A Mahindra Thar owner has customised his SUV with dialogues of Amitabh Bachchan printed all over the exterior.Mahindra Chairman Anand Mahindra appreciated the Thar owner's efforts, sharing the image of the vehicle on Twitter.
By : HT Auto Desk
| Updated on: 24 Oct 2021, 05:06 PM 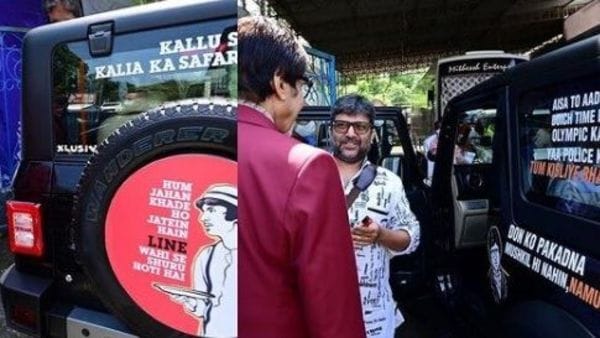 The actor signed on the dashboard of the Mahindra Thar.

Pictures of a Mahindra Thar with inscriptions of iconic dialogues and artwork of actor Amitabh Bachchan has gone viral and received the attention of industrialist Anand Mahindra. He took to Twitter to share a note of appreciation for the Thar owner.

Mahindra shared a post by the actor himself featuring the dialogue-inscripted Thar and wrote, The fan @anuragchirimar, who chose @Mahindra_Thar for his fan moment with @SrBachchan. This was followed by a dialogue from Bachchan's movie.

The owner of Thar, Anurag Chirimar had met with Bachchan and showed his creation, after which the actor clicked pictures with him and also signed the car's dashboard. It was not only the Thar's exterior that sported dialogues from Bachchan's acclaimed movies but upon opening the door, the sound system too plays dialogues of the actor's movies. The dialogues have been taken from the actor's movies released between the 1970s to 1980s including Don, Deewar and Kalia.

Appreciating the car featuring these dialogues, Bachchan had posted pictures of the vehicle on Instargram handle, saying, “He has painted his entire car with dialogues from my films… and his shirt has all the names of my films… when you open the door to the car the sound system starts playing my dialogues." He also shared that Chirimar didn't drive the SUV until he received an autograph from the actor.

Mahindra Thar comes in a 2.0-litre turbo petrol engine as well as a 2.2-litre diesel powertrain. The vehicle offers a six-speed automatic transmission for both the engines. It is one of the few SUVs sold in the country that comes with off-road driveability. It is also equipped with cruise control, a 7-inch touchscreen infotainment system featuring Android Auto and Apple CarPlay and climate control.