Hyundai is hoping Alcazar not only attracts a new class of customers in India but may also wow Creta customers looking at upgrading.Hyundai Alcazar, with its third-row seats, could be a viable option for larger families.
By : Shubhodeep Chakravarty
| Updated on: 13 Apr 2021, 03:14 PM 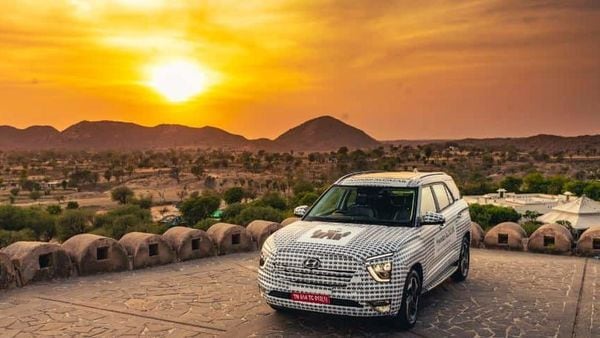 Alcazar has a wide presence from the front but a closer look reveals some elements which are similar to the Creta.

These are busy days for Hyundai India, as busy as it can get when the Koreans give final touches to an SUV here. And because Alcazar is Hyundai's first foray into the three-row SUV segment in India, the build-up is quite understandable. Based on the highly-successful Creta, Alcazar is a younger but larger sibling that is making a long list of promises and does have the potential of making crowds gather. But could it possibly steer the attention away from Creta?

Alcazar is all set to make its global debut and hit the Indian markets soon. That it has certain similarities to the Creta is obvious but Hyundai underlines that it will create a niche space for itself. Speaking to HT Auto on the sidelines of an event to showcase the camouflaged Alcazar, Tarun Garg - Director for Marketing, Sales and Service at Hyundai Motor India - explained that the preference and demand for SUVs is strong enough for each product to succeed. "We have completed one million Made-in-India SUVs now and it gives us a clear position in the market. That advantage will come to all SUVs - current and upcoming," he said. "Alcazar is a very unique product and will attract a totally different class of customers. Of course, this may include upgraders but it does not mean they are choosing between Creta and Alcazar."

Comparing Alcazar to Creta may be an apples to oranges comparison but then again, if pricing is a game well played, the larger SUV could perhaps become a solid proposition for those in the market for a Creta. After all, the option of having that third row is gradually getting a thumbs up from Indian buyers. Garg also highlights that Hyundai sees an increased need for families to travel together in Covid times and this is where the company's upcoming car could have the advantage. "We saw in our market research that post Covid, customers have come even more close to their families, they want to travel together. That is where the concept of a three-row really kicks in," he explained.

But what about a segment where Hyundai thus far has had no presence? Garg sees no reason why going big can't also be going strong when it comes to a three-row passenger vehicle. "Whether it was the Santro in 1998 or Creta in 2015, Hyundai has believed in creating segments. For that, one has to take some risks. We believe this three-row segment is something that is just starting to build in and there's some market for it," he said.

Alcazar will be offered with a 2.0-litre petrol engine and a 1.5-litre diesel motor. Both will have either a six-speed manual or six-speed automatic gearbox. With a best-in-class wheelbase, Hyundai is also promising a whole lot of space on the inside. Garg, therefore, is confident that the car would be able to attract customers who drive as well as those who prefer being driven around.