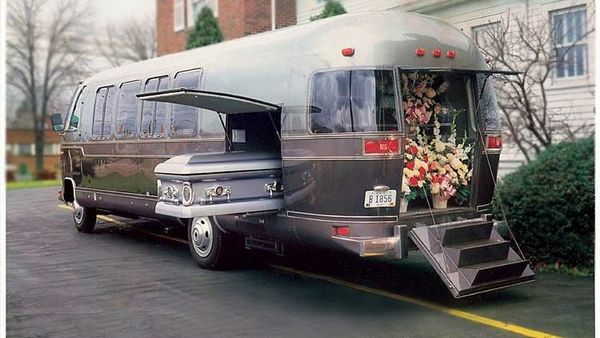 While most motorhomes are the stuff of dreams, a 1982 Airstream Excella 280 Funeral Coach that has been converted into a haunted room game seems to be the stuff of nightmares. It is one of 33 such pieces built by Airstream, located around Michigan and being sold on the Facebook Marketplace for $50,000 (around ₹36 lakh).

As a funeral coach, the Excella 280 was originally designed to carry a large group of people for the last ride with their passed-away loved one along with space for the coffin, caskets and a lot of flowers. This particular version is now being sold as a mobile escape room with a vampire theme. The game room can accommodate up to six players who get 40 minutes each to escape the space before they are caught by the vampire. The adventure game has been named Vampire's Lair. The new owner of the mobile escape room will also be trained to run the game and be given all its marketing and advertising material.

The funeral coach from 1982 is pretty well maintained but is not up and running. It needs to be towed using a flatbed to the buyer's location. The last it was driven on roads was about five to six years ago. Otherwise, the Excella 280 Funeral Coach is outfitted with a 454 V8 engine and automatic transmission. It has been built on a 28-inch long Chevrolet P30 truck chassis.

The funeral coach traditionally featured a bathroom with a shower, a full kitchen, twin beds, a sofa bed, and two HVAC units for optimal comfort. Though it is likely that all these will be intact in the mobile escape room, what should concern the buyer more is that the vehicle will come with all the props required to run the scary and morbid game.