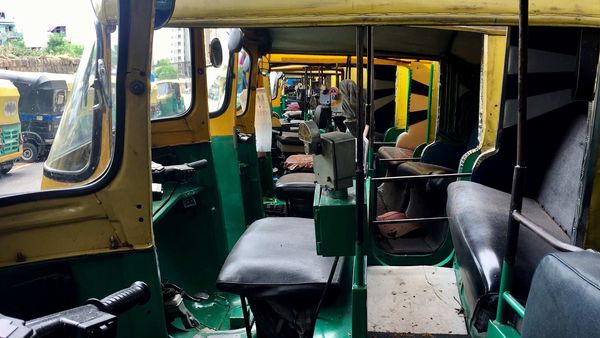 Auto Rickshaws are seen parked during the government-imposed nationwide lockdown as a preventive measure against the coronavirus.

With the Centre giving state governments the power to decide on running passenger vehicles, several auto drivers in the national capital came to the streets on Monday hoping that the Delhi government will announce relaxations.

Auto drivers from Mandawali area told ANI that they want Delhi government to allow three-wheelers on roads and added that they would ensure that all guidelines are followed until the Covid-19 crisis subsides.

"We want some relaxations to be announced now, how many days more can we survive without working? We will ensure all guidelines are followed, we will also not allow more than one passenger to sit in the vehicle at a time," Sunil Kumar Yadav, an auto driver, told ANI.

Yadav, however, added that even if the government gives permission their earnings will only be restricted to making ends meet.

"People are not coming out of their houses, rails, planes are also not working. Tourists and visitors from other states, countries are also not coming, therefore, passengers are likely to be less in number. However, it will be better than sitting idle as we have been doing for close to two months now," he said.

Mohammad Nafis, another auto driver, urged the Delhi government to allow a maximum of two passengers at a time in an auto.

"Except in cases of a family, two passengers should be allowed at a time as it is difficult to get single passengers. However, overloading should not be allowed, but we just want a chance to drive our autos on the streets so that we can earn our livelihood," Nafis said.

Several other auto-drivers in the area said they were being harassed by their landlords for rent, and it was becoming increasingly difficult to make ends meet due to the lockdown which has been in force since March 25.

They also said that several auto drivers, who hailed from Uttar Pradesh and Bihar, have returned to their native places during the ongoing nationwide lockdown.

Delhi Chief Minister Arvind Kejriwal is likely to announce the guidelines to be implemented in the national capital during phase four of lockdown later today.

Phase 4 of the lockdown was announced by the Centre on Sunday.