Ultraviolette has received over 65,000 pre-orders from 190 countries for the F77 electric motorcycle.

Bangalore-based electric two-wheeler manufacturer Ultraviolette created a lot of hype with its F77 electric motorcycle. The motorcycle has been under development for the past two years, it is being aimed toward the enthusiasts. Now, Ultraviolette conducted a test ride event for the pilot community. The event was held at TAAL (Taneja Aerospace and Aviation Ltd.) airfield on India's 75th Independence Day. Some members of the Indian aremd forces were present at the event and they also test-rode the production-spec version of the F77 electric motorcycle.

Ultraviolette says that the F77 is inspired by aviation design and engineering. It seems like the commercial launch of the Ultraviolette F77 is still a few months away and the manufacturer will start public test rides in September 2022. The F77 was built from the ground up as a high-performance electric motorcycle. 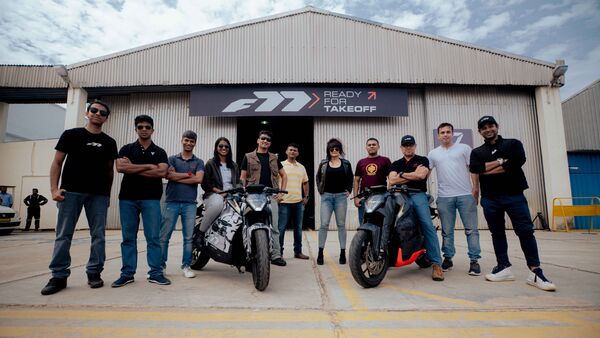 The pilots that took the test ride were given various opportunities to experience various parameters of the F77 such as torque, acceleration, handling and braking. The motorcycle has been tested in various terrains so that it can handle different climatic conditions in India.

The F77 looks striking with its aerodynamic yet aggressive styling. It will be offered in three colours. There is Airstrike, Shadow and Laser. It comes with a TFT LCD Display that displays all the vital information about the motorcycle. The motorcycle has a kerb weight of 158 kgs which is quite less. The seat height is 800 mm so it should be accessible for most people.

There will be three battery packs and the riding range will vary between 130 km to 150 km. The battery pack can be charged in 5 hours if using a standard charger or 1.5 hours using the fast charger. The electric motor is capable of producing 33.5 hp of max power and 90 Nm of peak torque. It has a claimed top speed of 147 kmph. The motorcycle can hit 0-60 kmph in 2.9 seconds and the100 kmph mark in 7.5 seconds.