Cake Kibb electric autonomous ATV comes with a modular mainframe that can be modified for different purposes.
By : HT Auto Desk
| Updated on: 14 Jun 2022, 01:11 PM 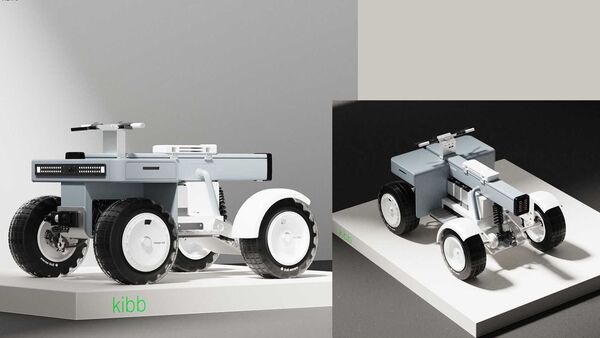 Swedish electric motorcycle manufacturer Cake has developed a new modular autonomous and all-electric concept ATV that is meant for the farmers. Christened Cake Kibb, this ATV concept looks very unusual but eye-catching for sure. The company claims that this concept has been developed by keeping an eye on its distinctiveness and minimising soil and wildlife disturbance, as it runs quietly, thanks to the pure electric powertrain. The company claims that animals in the farm too won't be disturbed by the maneuvering of this EV.

The Cake Kibb comes following design principles, which have been already integrated into its other machines. The company claims that its battery packs can power other electric devices out in the wild into full account. A concept sketch reveals that the Cake Kibb comes with solar panels to keep the vehicle's battery pack topped up.

The all-electric autonomous ATV has been designed by digital designer Fanny Johnson, who previously designed an all-electric bike for Cake. Christened Cake Osa, this electric motorcycle appears to have influenced the new ATV. The main frame of the ATV strongly resembles to the Osa. The only major difference is that the ATV has four wheels, whole Osa comes with two.

Just like the Cake Osa, the Cake Kibb too comes equipped with some useful features. The modular design of this ATV allows it to be fitted with large storage racks and baskets. It can carry crates fool of goods or harvested products.

Another interesting feature about the Cake Kibb is the use of environment friendly materials to build this. The designer has envisioned the vehicle to be built with fully recyclable aluminium, recycled rubber, bi-based silica and dandelion based rubber for the tyres.