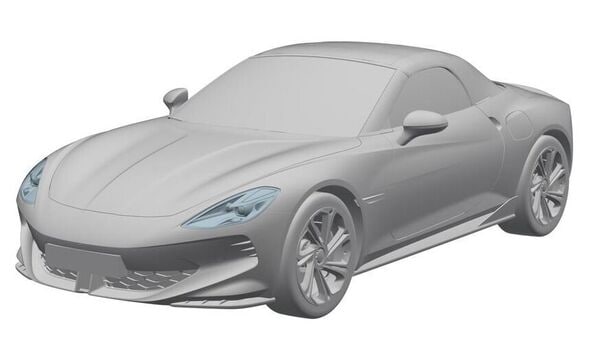 MG Motor is working on an exciting-looking all-electric roadster that comes bearing the legacy of the TF convertible and appears influenced by the BMW Z4. Christened as MG Cyberster, this roadster's patent images have been leaked online revealing the car's design. Also, it appears to be the production version of the Cyberster concept displayed by the British car marquee. However, the leaked images reveal that the production version of the car would come without any resemblance to the concept.

Speaking about its design, the MG Cyberster appears a sleek and stylish model that gets a long and sloping hood with swept-back headlamps. The nose sector is compact and sleek and gets a conventional grille instead of a fully closed body panel, which is usually followed by electric cars. The overall look of the car gives it a sporty appearance.

Moving to the side profile sporty wheels, a suave and fluid-looking cabin with a retractable soft-top and subtle character lines are there. At the rear, it gets a design that is a bit like Polestar. The patent images suggest that the MG Cyberster will appear with a sleek and wide LED light bar acting as a taillamp and there will be outward-facing arrows which would act as turn indicators. Also, these outward arrows are integrated into what seems some type of mesh, like air exhaust meant for cooling.

MG is yet to reveal any specification detail about this upcoming convertible. However, the Cyberster concept was claimed capable of accelerating 0-100 kmph in less than three seconds. Also, the bespoke electric car is expected to run a maximum range of 800 km on a single charge. Expect it to enter production sometime in 2024. Before that, the British car brand owned by SAIC is likely to unveil the production model sometime next year.