MG announced on a Chinese social media site that it has received over 5000 registrations on its crowdfunding platform that was established to determine whether the Cyberster concept car should be produced or not.
By : HT Auto Desk
| Updated on: 09 May 2021, 11:46 AM 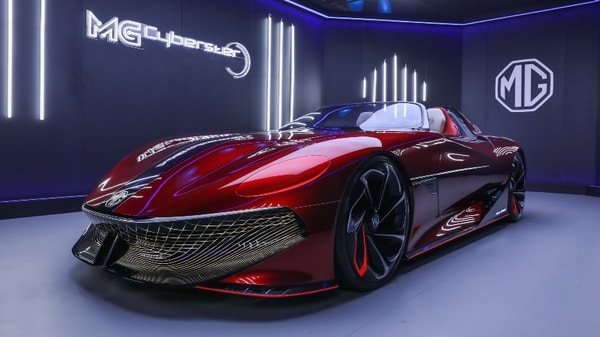 MG has announced that the Cyberster electric sports car concept, that it introduced at the 2021 Shanghai Auto Show last month, will enter production after the company hit its crowdfunding goal.

The announcement was made on a Chinese social media site after the company received over 5000 registrations for its 'MG CyberCUBE' crowdfunding platform that was established to determine whether the concept car should be produced or not. The car will go into production for both left- and right-hand drive markets.

Each of the MG CyberCUBE registration costs around $154 'share' deposit. The inputs provided by the crowdfunding participants will be used to develop the MG Cyberster.

Though MG has not given any timeline as to when the Cyberster will be produced, the car is likely to be one of the most attention-grabbing vehicles when it hits public roads. The car has been developed by the team at the MG Advanced Design Centre in London. It gets classic round MG headlights, 'laser belt' LED strip down the side of the car, plenty of LED strips and LED tail lights that are integrated flat into the rear of the car.

Inside the cabin, the car not only portrays a premium feel through the design and materials, it also looks futuristic in terms of usage of digital elements. The driver might feel like being inside a video game while driving this car, thanks to the unique steering wheel and a completely digital instrument cluster sitting ahead of the steering. MG claims that the Cyberster will be the world's first electric super sportscar to get a gaming cockpit.

The car gets a claimed per-charge range of 800 kilometres and it can sprint from 0 to 100 kmph in just under three seconds which may make this machine both a practical one and one that pumps up adrenaline levels.